A comprehensive overview of conflict and fragility

Structures at the basis of society

The security sector, the political system and the socio-cultural norms that govern our behaviour are all structures that order our world. Analytical models take these structures into account in different ways, depending on the goals of the analysis. Many models from the development sector for instance focus on socioeconomic analysis, assessments of governance and, in contexts of conflict, include overviews of the workings of the security sector.

Examples of structures in analytical frameworks

The Fragile States Assessment Methodology is a model designed for the Dutch Ministry of Foreign Affairs to develop strategies to support socioeconomic development and security & governance reform in fragile states. It focuses on six ‘foundational factors’ (territorial integrity, history of state formation, sources of revenue, social and economic structures, geostrategic position and geography) before applying statebuilding-focused analysis. NATOs Allied Joint Doctrine for Operational Level Planning on the other hand focuses on a broad range of factors related to conflict and war in its guidance on the examination of crises and conflicts (page 2-8). It covers environmental, political, social, cultural and economic structures that are listed as: circumstances (history of the conflict, geo-strategic position, physical environment, national and regional infrastructure) and population and culture (populace, culture, political, economic and social issues, legal issues, and information environment), before identifying catalysts for conflict, actors and causes of crises. The World Bank’s Country Assistance Strategy emphasizes socioeconomic structures, including poverty, gender, socio-political and institutional factors, the macroeconomic framework, debt sustainability, the external environment, governance and private sector development, while leaving room for other cross-cutting issues, such as education, health and nutrition.

In the frameworks covered for this review, the most frequently named objects of analysis are found within political (82), social (79), and economic (76) structures. While objects from the security (47), environmental (33), and especially the cultural (23) structure lag behind. This division is mirrored among the frameworks that aim to analyse contexts of conflict and fragility, where political (28), social (28), economic (27) and security (26) are common, while environmental (13) and cultural (7) objects of analysis are relatively few. 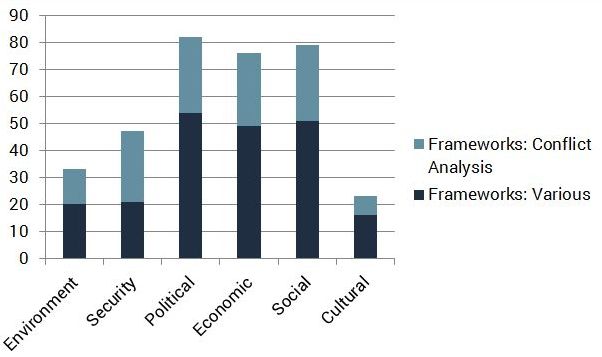 Levels of analysis: a choice between zooming in or out, or covering the complexity of multiple levels

Levels of analysis in models vary from global processes to local issues, while some models try to capture the links between different levels or follow chains or networks that are active at all levels. Each choice regarding these levels of analysis provides an opportunity to zoom in or out and focus on a certain range of factors. Zooming in on a specific level will allow the analyst to pay more attention to detail and study relations between factors. This method is often used for formal quantitative models that need to limit the variables they introduce so they can make predictions about probability; for instance on how an arms race will develop or how raising or lowering tariffs will influence national economies. It can also be used for analyses that focus on the human perspective, like a Post-Conflict Needs Assessment. Zooming out, on the other hand, will reveal the relations between different levels, often giving a more accurate view of how networks like global value chains work, or how social networks can reveal the workings of terrorist cells, criminal organizations, foreign governments, or potential domestic threats.

Examples of levels in analytical frameworks

Economic models are the most diverse in terms of the levels they address. They focus on the national (macro) level, the local (micro) level or the international level, while the study of global value chains connects all these levels by following the entire chain of a certain product from the raw materials to the store in which the end-product is sold. One such model is the OECD’s NiGEM, used to assess member countries’ macroeconomic indicators in order to forecast economic developments. NiGEM uses national figures on production, price-setting, labour markets, consumption, income, wealth, financial markets, monetary rules, bond and equity markets, the public sector, income tax and external trade for policy analysis and economic forecasting. Another example is the German Development Agency’s Livelihoods Analysis in Fragile Contexts, which has a socioeconomic focus and uses a mix of structured and in-depth interviews to analyze illegal, drug-based, economies at local level in order to come up with sustainable alternatives.

As shown in the graph below, a comparison from the larger review of 88 frameworks shows that the most common analytical level is the national, with 82 frameworks including this in their methodology. The local (23), global (16) and regional (14) levels are underrepresented. This is shown among the conflict and fragility focused frameworks as well, where the national level (27) is included three times as often as either the regional (11), global (10) or local (9) levels. 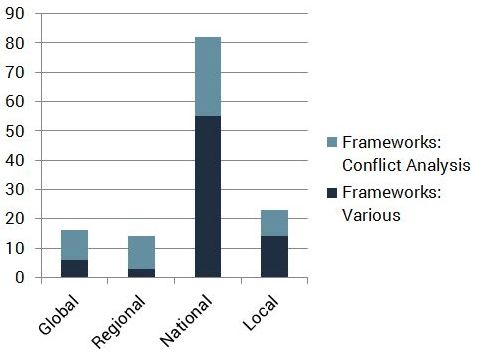 At the intersection of each level and structure, like political processes at global level or social divisions at local level, three dimensions can be identified for the purposes of context analysis. These are factors, institutions and actors.

Factors are basic facts and data that can be gathered on a certain context. For example figures on wealth distribution, facts like whether the state has any breakaway regions or border disputes, or what religions are practiced in a certain area. Institutions are the rules and agreements that govern a given context and shape human behaviour. They exist only because people agree that they do. Institutions can be formal, like the laws and regulations made by the state that guarantee rights and structure the economy, or security alliances and trade agreements between states. Or they can be informal, like the cultural norms that govern behaviour and shape people’s perceptions, or systems of patronage where those in power trade favours in return for allegiance or votes. Actors are the people, organizations, governments or other groups that work within the context of these factors and institutions.

The interaction among these three factors can account for most of the dynamics of change, power, and continuity within society for the purposes of context analysis. To clarify this division it is useful to display these structures, levels and factors visually on a matrix grid. 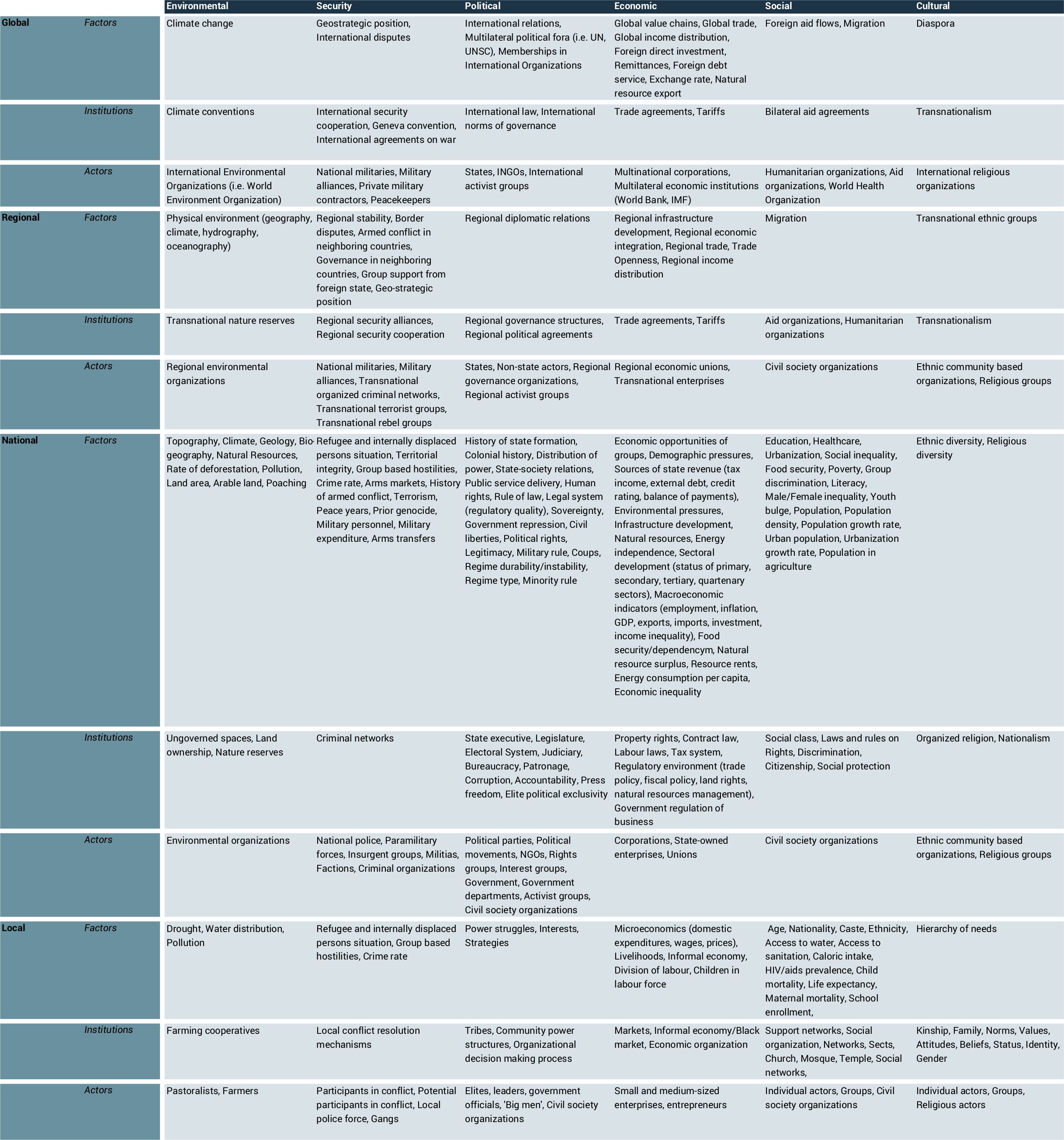 Focus: how do models approach their data?

Commonly shared methodological aspects of models for conflict analysis are a focus on the structural context of society, the causes and drivers of conflict, identifying actors and tracking conflict dynamics. Analysis of fragile states sometimes includes these factors alongside a focus on state-building, which means focusing on the legitimacy of the state, rule of law, corruption, accountability, and socio-economic indicators. Using the above matrix, these types of focus can be aggregated into indicator-, narrative- and power-focused methodologies. This means that analytical models that examine the intersection of the abovementioned structures, levels and factors will be examined with these three different goals in mind.

An indicator-focused study would thus create indicators to compare the state of a certain context to ideal circumstances or a baseline from an earlier study, expressing the analysis in quantitative terms. Examples are the World Bank Governance Indicators, and the Millennium Challenge Corporation’s Scorecard. Narrative-focused models, however, are used to provide more in-depth, context-specific information in a descriptive report. The report will be based on primary research (like conducting interviews) and/or secondary sources (like scientific literature, news articles or laws and regulations). Examples are USAID’s Conflict Assessment Framework, and NATO’s Allied Joint Doctrine for Operational Level Planning (page 2-8).

Lastly, a power-focused methodology examines actors, formal and informal institutions, and the way power in society functions and is exercised. This is most often done in order to see how change in these structures is likely to come about – for instance when examining what policy reforms will likely be successful or obstructed by local elites. Examples are SIDA’s Power Analysis, and the UK Department for International Development’s Politics of Development Framework.

Often, these approaches are combined, as in the New Deal’s Fragility Assessments, which bring together quantitative indicators and qualitative analysis or the State-Society Analytical Framework developed by the Initiative for Peacebuilding, which combines qualitative mapping with the workings of power in society. Further variation exists in the use of different tools that structure parts of the analysis within a framework such as Stakeholder Analysis, Problem-tree Analysis, or methodologies like PESTLE, ASCOPE and PMESII, all analytical tools that come back throughout the frameworks that have been reviewed.