A velvet revolution: from MDGs to SDGs 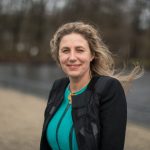 The report of the Open Working Group (OWG) on SDGs is praised as paradigm shift. Communicating these goals is now key, not only for their survival during the negotiations in the General Assembly next year, but also for their effective implementation.

‘A beautiful balance of collective action’, India called it during the 69th UN general assembly. In August 2014, after one and a half year of negotiations, the Open Working Group (OWG) transmitted its report with 17 goals for the next 15 years. By putting sustainability at the core, and by aiming also at developed countries, the proposed SDGs are hailed as a paradigm shift,. The report is “remarkable in its depth and breadth as well as its transformative reach and impact” (Co chairs OWG). Some like the UK have expressed the need to go to a more narrow-based agenda focused on poverty alleviation and limited to 12 goals (UNGA 69th session). This in turn provoked a reaction from the originally skeptical G77 to push ahead and declare the current report as final. One year of negotiations remain. What is needed next are robust indicators to give targets teeth and a value driven vision, incorporating indigenous views.

The High Level Panel Report was crucial in engineering the OWG result and had a simple effective communication tool. The OWG report however more closely reflects the Rio+20 outcome. The set of 17 goals negotiated by the Open Working Group seem a given. Added to this will be a values oriented vision, indicators for measurement, monitoring tools and means of implementation. On 5 December the UN Secretary General released his report The Road to Dignity summarizing the process on formulating a new development agenda after 2015.

From a manageable 8 mainly social MDG goals, the debate moved to 17 transformative SDG goals. Besides being ambitious, the current set of draft goals is also highly politically charged. This makes it compelling to adjust the message to a simpler, concise one. One possibility is splitting goals up in the three categories of the definition of sustainable development – social, economic and environmental – each composed of 5 goals. The danger of clustering the goals into categories however is to separate them into different spheres again, thereby losing the main gain of the SDGs, namely integrated sustainable development. Representing them in a circle would undercut that problem, showing interconnectivity and a holistic approach.

Two goals stand out. Firstly, the global partnership goal 17 is about implementation of the goals. Partnership encompasses the goals; it is about interconnectivity, interdependence, the environing whole. Sustainability issues cannot be solved by one country alone and need concerted effort. One could also refer to them as ‘global public goods’. Africans would call it ‘ubuntu’, Asians ‘happiness’ (compassion), Latino’s ‘harmony (with nature).’ Partnership could be said to be the outer rim of the circle or the ‘box’ in which development takes place.

Secondly, the inner core of the SDGs could be represented by goal 16 on peaceful societies, access to justice and effective, accountable, inclusive institutions. The rule of law after all is a sine qua non for reaching any of the other goals, a regulatory principle for monitoring (accountability) as well as for implementation on a non-discriminatory basis ensuring inclusiveness. This way one accommodates both the proponents of the goal on justice and peace by recognizing the centrality of the issue as well as the many nations who opposed it regarding it as an enabler.

The MDGs have galvanized international support for development. The draft SDGs are trying to do something more bold: mustering support for sustainability in all human endeavors, whilst maintaining support for a global partnership and a human rights agenda. It has taken almost 30 years after the Brundtland report signaled the importance of sustainable development, to come to this point. Communicating these goals in a simple manner is of the utmost importance to raise consciousness about the transformation ahead. Implementation depends on it. 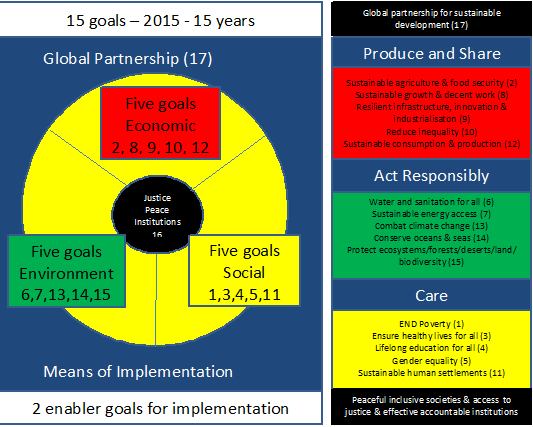 Dr. Dorine van Norren is an associated researcher at the Leiden University, Van Vollenhoven Institute for Law, Governance and Society.