Agricultural policy to stem migration: A look at Syria and the Sahel

Can the EU stem migration flows to Europe by supporting agriculture in countries of origin? In some situations, it can. The impact could be particularly large if Europe worked to increase the resilience of the food system and the people in countries with self-sustaining farming, thereby reducing reasons to migrate. Yet in countries that rely on market-oriented farming, the context is too complex to find a simple solution.

This expert opinion is part of our living analysis on migration

The intertwined issue of migration, agriculture and food security was the subject of a live debate in Amsterdam on 14 March. The group of participating experts included Henk Breman, agrobiologist, Bram van Ojik, Special Envoy for Migration of the Dutch Ministry of Foreign Affairs, Zayaan Khan of Slow Food International, and Mohammad al Haj Ali, former farmer and refugee from Syria. Many farmers, representatives of NGOs and academics were also present.

The most gripping part of the debate was a detailed elaboration by Henk Breman. He distinguished between two important forms of farming – market-oriented and self-sustaining – and outlined the effect of conflict and migration on both systems. He illustrated this division with two relevant examples from the migration debate: Syria, a country of exodus, and the Sahel, a key transit point.

Market-oriented farming in Syria; self-sustaining farming in the Sahel

Syria’s agriculture sector is an example of market-oriented farming, where agricultural produce is produced for sale at market and farmers earn a living by being part of a larger value chain in which the agricultural products are processed and exported. After Assad forced economic liberalization in 2007 and stopped subsidising fuel and fertilizers, food prices skyrocketed. The market collapsed and several years later, in 2011, the first Syrian rebellion started during the Arab Spring. Therefore, as Breman argues, to advance stability in Syria the solution should be technical and political rather than agricultural. Merely intervening in agriculture could backfire, as there are many factors at play.

Breman illustrates this argument with the figure below, which shows the historical relationship between high food prices, social unrest and political instability. 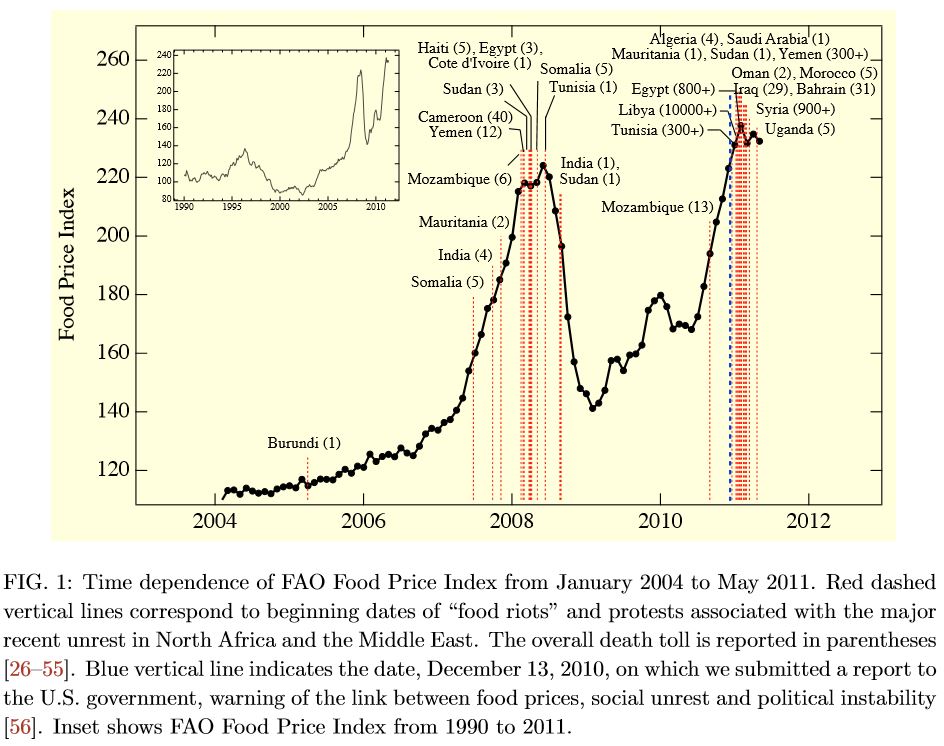 In contrast to market-oriented farming in Syria, many African countries are a good example of small-scale, self-sustaining farming, in which farmers produce enough to feed their household.

Most African countries have an extensive self-sustaining farming system in which a lot of land is needed for food production. In comparison, most European countries have an intensive food system and harvest more produce from less land. While the latter may seem more productive, according to Breman, African countries may also benefit from having an extensive system because it creates employment opportunities and, therefore, enhances stability. However, ther e is also a downside: because initiatives to increase agricultural production as part of the Green Revolution have not led to great success in Africa, buying imported food has become cheaper than buying food produced on the continent.

Investing in simple mechanical developments to increase employment in agriculture

To maintain the employment opportunities that extensive farming offers, and without increasing food prices too much, a possible solution is to invest in simple mechanical developments in farming. Such basic developments would also reduce the risk of environmental degradation caused by the (largely unregulated) Green Revolution. Enhancing productivity in smallholder farms was also seen as a solution at a workshop on youth empowerment in agriculture held at Wageningen University on 22 March. Also, the Food & Business Knowledge Platform has recently started to map the bottlenecks that prevent youth from successfully engaging in agriculture and the potential to keep youth employed in the sector, as well as the work of organizations on this issue.

The complex relationship between agricultural policy, youth employment and migration

As the issue of migration is high on Europe’s policy agenda, discussions about engaging youth in agriculture as a means to reduce migration have become particularly important. In light of the large population growth in Africa, this may become an even more pressing issue in the future. Accordingly, the Special Envoy for Migration of the Dutch Ministry of Foreign Affairs, Bram van Ojik, is concerned with long-term interventions to stem economic migration from Africa in the future. These are complex issues. During the debate, van Ojik stated that it is difficult to unravel the relationship between agricultural policy and the creation of opportunities for youth in Africa and migration to Europe. In this respect, he noted that the Dutch Ministry of Foreign Affairs is ‘already making policy’ on the issue, while at the same time still researching what works. One of the key challenges, according to van Ojik, is that many people migrate as soon as they start to earn some money, which is a perverse effect of economic development in Africa.

Can agricultural interventions prevent people from migrating? In countries in the Sahel with self-sustaining farming, increasing the resilience of the food system and of the people, and investing in simple mechanical developments in farming may help to keep employment in agriculture high without disturbing food prices too much. This may reduce incentives to migrate. However, in countries that rely on market-oriented farming, like Syria, a political solution is needed rather than agricultural interventions. In addition, as participants at the debate also pointed out, regional cooperation is important to make infrastructure cheaper and production more cost-effective. Markets should also be protected to a certain extent so as to avoid the dumping of food, disturbance of local markets and food prices, and land grabbing. However, for short and long-term policy interventions, it is necessary to increase our understanding of the relationship between agricultural policy, employment and migration.

This article has also been published on the website of INCLUDE.

Understanding the complexity of the African diaspora