A review by David Sogge. 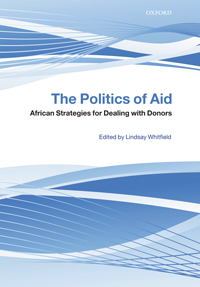 Who calls the shots in the aid encounter? In the main, it’s the donors. But surely this is now improving, thanks to new recipient-friendly aid policies? Alas, that is not the case. If anything, the dominance of donors and their entanglement in African governance are becoming more intense.

Such are the conclusions, in brief, of this substantial book documenting the findings of a study by a team of researchers at the University of Oxford. The main question: In aid negotiations, particularly since the late 1990s, have recipient African governments gained more power over actual policy outcomes? Given the earnest talk about ‘partnership’ and ‘country ownership’, that’s a good question.

The first chapter casts a critical glance at some of the concepts that are routinely used to explain how recipients and donors behave. The ‘rational actor’ model, for example, sees negotiators as utility maximizers. But this perspective cannot explain much real behaviour, especially of anyone who would question mainstream aid notions such as ‘sound economic policy’. Consequently, the researchers favour a political economy approach, in which donors and recipients are not merely calculating players in a game, but actors whose interests and preferences are driven by ideas, memories and other forces that construct their political contexts.The second chapter chronicles aid recipients’ loss of sovereignty as driven by the emergence, proliferation and regimentation (supervised from Washington, DC) of aid institutions. By 2000 this process had culminated in what the researchers chillingly but justifiably call a ‘complex conditionality and surveillance regime’. This history recounts some, but by no means all, cases of how recipients have responded – sometimes with collective self-assertion, but mainly with passive resistance – and how they have faced defeat, self-inflicted and otherwise.

The following chapter focuses on the period after 1999, the ‘partnership era’, when the aid industry, eager to restore its legitimacy and spending power, began promoting a new paradigm. This included recipient-formulated strategies meant to address poverty, to fast-track a way out of debt, and to codify new, harmonized, recipient-aligned rules of the game. All of this had the noble aim of getting aid on the high road to effectiveness by putting recipients in the driver’s seat. Bracketed between these solid introductory chapters and a forceful concluding chapter, are eight case studies of sub-Saharan African countries that probe the aid encounter in terms of the participants’ ‘negotiating capital’, negotiating strategies and outcomes.

Have recipient governments in fact taken charge? In all but two cases, the short answer is ‘no’. The governments of Ghana, Mali, Mozambique, Tanzania and Zambia still have little control over implemented policy. Rwanda’s has only slightly more sovereignty. Their economies remain weak, as do the development visions of their political classes. Their leaders are thus left with little negotiating capital. ‘Ownership’ of policy proves hollow. Recipients are permitted to ‘own’ only those policies that meet donor approval – a concern that triggers yet more intrusive aid conditions, more vigorous indoctrination, and deeper penetration and engineering of recipient governments by donors. Under the pretence of ‘ownership’, the elites in these countries accept subordination as a means of maximizing aid flows, which can figure usefully in domestic political affairs.

Ethiopia and Botswana, in contrast, have largely defended their sovereignty, and their officials exercise large measures of control over policy. Both governments inherited structural advantages and translated them into negotiating capital. Crucially, they have kept donors ‘out of the kitchen’, thus confirming Joseph Stiglitz’s accounts (not cited in the book) of how both countries improved their economies because they sent the IMF packing.

This study is part of a research programme on global economic governance, a realm badly needing investigation, given the relentless migration of power from national to supra-national levels, where the aid system’s commanding heights are found. This convincing book leads to a sobering hypothesis: a precondition for national ‘good governance’ is good global governance.