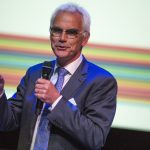 Since February 2014 Bart Romijn is executive Director of Partos, the Dutch association for development cooperation, with about 100 member organisations. In addition, Bart is a member of the Board of Worldconnectors, of the Steering Group Sustainable Development Goals Charter and chairman of the international advisory board of VOICE, an innovative support program for the most marginalised and discriminated people in Africa and Asia. Prior to his directorship of Partos, Bart co-founded and acted as director of Warner Strategy & Fundraising BV. (2004-2014), and founded and acted as director of AIDEnvironment (1988-2004). Bart completed his studies at Wageningen Agricultural University and then began his career as campaign leader and spokesperson of Greenpeace Netherlands. Since then he worked for and with national and international non-profit organisations and governmental institutions for over 38 years.

In order to create a sustainable collaboration, Romijn argues, diaspora organisations and the development sector should develop interpersonal relationships and come up with shared bottom-up initiatives.