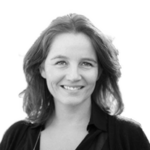 Esther van Rijswijk is journalist, presenter and facilitator. Based on her background in economics and her previous work as a policy advisor for the Ministry of Finance, Esther’s journalist work has focused on economic policy making and politics. Furthermore, she developed the journalistic tool ‘mattermap’ for discourse analysis and visualising debates. As a journalist she worked for the Dutch opinion weekly Elsevier, was correspondent in London for the Dutch news broadcaster RTL and wrote a column on economics for the weekly HP/detijd. Currently, Esther is working as a facilitator for both strategic and creative brainstorms and frequently moderates congresses and debates. She regulary appears on radio and television as a economic commentator.