Ballot or bullet propelled changes for Liberia after 2017

The next two years will be crucial for the West African country of Liberia. In 2016 the United Nations peacekeeping force UNMIL will transfer the full responsibility for security to the Liberian authorities, and in 2017 a new president will be elected.  To understand the vulnerability of the peace process in Liberia we have to understand the history of Africa’s first republic first.

Liberia and its four million Liberians are on the eve of two important events that will make the political stability of the country very uncertain.

First of all, in 2016 the UN peacekeeping force UNMIL will transfer the full responsibility for peace and security in Liberia to the national army. As a result, it will considerably reduce its peacekeeping presence in the West African country from 3,590 to 1,240 military personnel by 30 June 2016. This shift is not without risk as Liberia’s army has a very dubious reputation. During the early 20th century, the Liberian army was responsible for human rights violations and serious crimes against the tribal population as it took sides and played a violent role in recent civil wars (1989-1997 and 1999-2003). This often resulted in screaming headlines by the international press.

Secondly, in 2017 Liberia will vote for a new president who will succeed Ellen Johnson Sirleaf, Liberia’s andAfrica’s first democratically elected female president.[1] President Sirleaf’s two mandates (2006-2012 and 2012-2018) have known both successes and disappointments. A major achievement was the cancellation of the country’s huge external debt of US$ 4.7 billion. This facilitated the interest of foreign investors in the country’s abundant natural resources. She can also boast about ten years of relative political stability. Yet critics have singled out many cases of nepotism, cronyism, land grabbing by foreign companies, her failure to fight corruption and the lack of attention for national reconciliation.

A troubled nation born of a difficult history

After the end of the second civil war, Liberia’s new start politically, socially and economically was seriously hindered by mismanagement, corruption and an increasing number of quarrels among leading politicians (‘the old guard’, including former warlords) and ambitious newcomers. Moreover and very recently, the country’s recovery was severely compromised by the Ebola epidemic, which devastated Liberia’s already weak public health system. 5,000 lives were lost according to official records however the reality is much worse and has resulted in many more orphans and torn families. 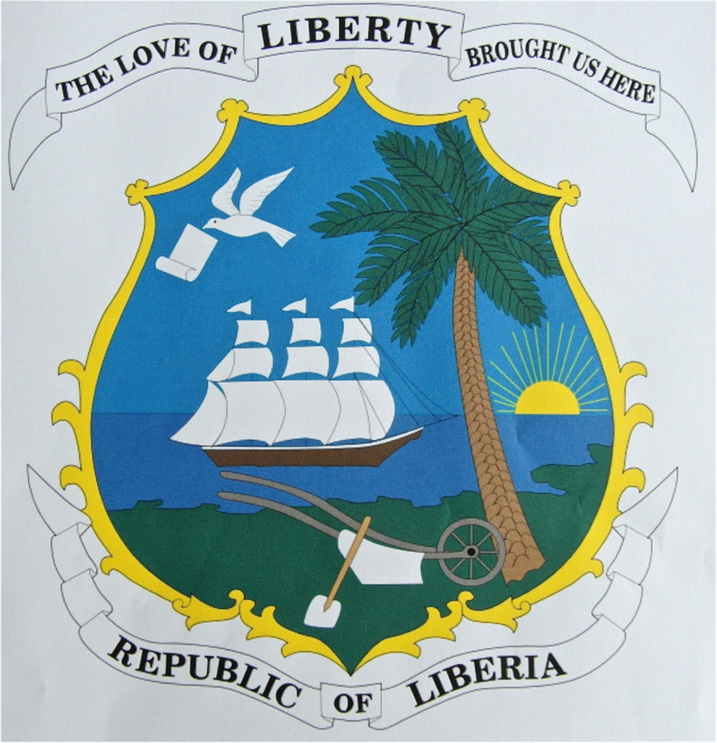 Picture: The Liberian coat of arms, with the national motto: ‘The Love Of Liberty Brought Us Here’

Already Liberia’s first steps on to the world stage of independent sovereign nations were made with great difficulty. To understand the complexity of Liberia’s history as an independent nation we have to look back to the early 19th century when an American colony was created on the West African coast..

The ‘return’ to Africa

In the early 19th century, there were between one and two million Americans of African origin in the United States. A movement emerged to promote the ‘return’ of freed slaves and free-born black and coloured people back to Africa. The success of the first, largest and most important ‘colonization movement’, the American Colonization Society (ACS), soon led to the creation of similar organizations in individual states such as in Vermont, Massachusetts, Connecticut, New York, Pennsylvania, Maryland, Virginia, Ohio, Indiana, Kentucky and Mississippi. The white directors of these colonization societies had several reasons for wanting to help their black compatriots return to the continent of their forefathers, which included Christian motives, humanitarian principles, political considerations, self-interest and of course, discrimination and even racism. After all, racial segregation was normal in all states of the US and only the white population enjoyed full civil rights.

The first colonists from the United States arrived in 1821 and liked to call themselves ‘pioneers’ and later Americo-Liberians. Tens of thousands followed their lead across the Atlantic to the western coast of Africa. The region where the colonists settled was already inhabited by some 20 different tribes. In 1847, the American colonists created the independent sovereign republic of Liberia with a constitution written by an American Harvard professor and a flag that looked like America’s. The indigenous population was excluded from citizenship by the rulers of the first African republic. The first nine presidents of Liberia were all born in the United States and Liberia did not have a president born in the country until 1884, yet he was still an Americo-Liberian.

A hopeful republic turned to tragedy

In 1980, a young sergeant-major of the Liberian Army, Samuel Doe seized power in a violent coup d’état, killing the Americo-Liberian president William Tolbert and thereby becoming the country’s first president of tribal origin. Until then, Liberia was seen internationally as one of the most politically stable countries in Africa, albeit with a conservative regime and based on a one-party system, yet that was the case in practically all African states at the time. In hindsight, Liberia proved to be a powder keg which exploded when Doe seized power, heralding a period of dictatorship, human rights violations and far-reaching economic decline. That was the prologue to 14 years of civil war (1989-1997 and 1999-2003).

What once started hopefully as the first African republic modelled on Western lines became a tragedy. The ideal of freedom of the American colonists was blown apart. The paradise on Earth that they dreamed of as they sailed the ocean blue proved only to be an illusion. Only until after the forced departure of warlord-president Charles Taylor in 2003 and the election of his rival Ellen Johnson Sirleaf (nicknamed ‘the Iron lady’) as president in 2005 did greater political stability return to the country, partly in thanks to UNMIL. Despite this increased stability however, some half a million Liberians now live outside their country because they lack confidence in a secure future in their African homeland.

Good from far, but far from good

Opinions are divided on President Sirleaf’s track record. In Western Europe and North America, she is praised for returning peace in a country torn apart by civil strife. In 2011 she was the joint winner of the Nobel Peace Prize. Her Liberian opponents highlight her controversial role in the start of the first civil war, the nepotism and corruption that have become trademarks of her administration and the lack of attention for national reconciliation. With a typical Liberian sense of humour, they say, ‘Ellen Johnson Sirleaf? She’s good from far, but far from good!’ 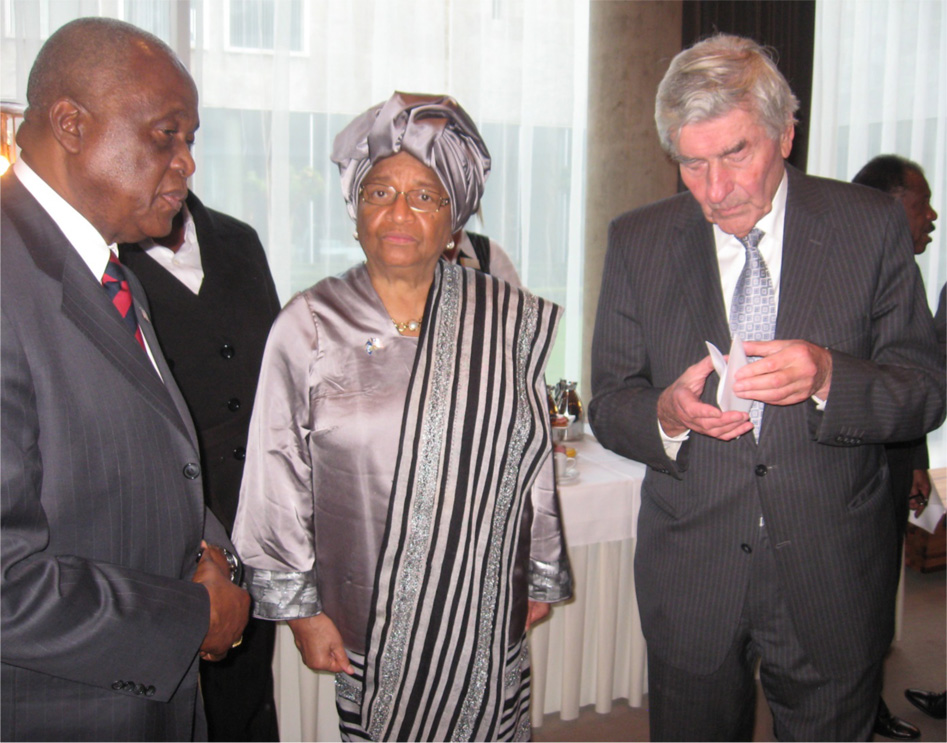 The future of Liberia, a country with the world’s largest rubber plantation, that once had the world’s largest mercantile fleet in the world and was once the biggest exporter of iron ore in Africa and ranked third in the world, is at an uncertain place. President Sirleaf publicly admitted that ‘education in the country is a mess’. In terms of income per day, the Liberian people are the second poorest people in Africa. Liberia’s infant mortality is the highest in the world. As though that were not enough, recently the UN identified the nation’s capital Monrovia – named after the US president, James Monroe who had made the colonization venture possible – as the poorest city in the world.

Who will succeed the ‘Iron Lady’?

The successor of President Sirleaf will face a difficult task. Among the presidential contenders is Benoni Urey, one of Charles Taylor’s confidents and reportedly Liberia’s wealthiest businessman. Another candidate is Prince Johnson, a former warlord who made history when he had President Doe tortured to death in the early years of the civil war. Nowadays, Prince Johnson is a senator for Liberia’s most populated county, Nimba County. George Weah is also a contender and a world famous football star. He won the African Footballer of the Year three times and also the European Player of the Year award and the FIFA World Player of the Year award. He is especially popular amongst young voters but with a track record of losses in previous presidential elections.

Last but not least, Vice President Joseph Boakai from Lofa County, the country’s second most populated county, is running. He has the support of President Sirleaf whose opponents are quick to point out that if the 70-year old Boakai wins the presidency, he may give President Sirleaf an honourable exit and exempt her from legal prosecution for her active role in the civil war.

A shelved report of the Truth and Reconciliation Commission

In 2009, Liberia’s Truth and Reconciliation Commission (TRC) recommended to bar Ellen Johnson Sirleaf from holding public office after her first mandate (2006-2012). This sanction undoubtedly caused the ‘Iron Lady’ to shelve the Commission’s final report. The TRC recommendations were never discussed in parliament. Impunity continues in Liberia. Former warlords and militia members, perpetrators of war crimes and crimes against humanity, walk freely in Monrovia and in the country. Impunity in Liberia is a time bomb – one never knows when and where it will explode.

Liberia was created on the wrong footing. The tribal population was excluded from citizenship by the ruling elite, black colonists from the United States and their descendants. The tribal population was also denied political participation by the ruling minority. Even the fruits of the exploitation of the country’s rich natural resources did not reach the majority of the population, the tribal people of Liberia. As long as exclusion persists, there will be neither peace nor political stability in Liberia. That is why the next two years are so important for Liberia’s future.

This article is based on the book ‘Liberia: From the Love of Liberty to Paradise Lost’ which can be ordered at the African Studies Centre, Leiden for € 15.00 by sending an email to asc@ascleiden.nl. The book is also available in open access.Click on the icon to the left for more information.

Liberia: From the Love of Liberty to Paradise Lost 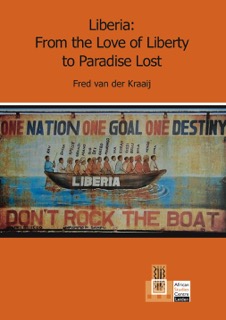 Picture: Cover book ‘Liberia: From the Love of Liberty to Paradise Lost’ The book is a personal reflection by a Dutchman on Liberia, a country with which the Netherlands has always had close – though often little known – relations. In the 1970s, as an enthusiastic young graduate in his twenties, the author left the Netherlands for Liberia. He lectured at the University of Liberia where his students included future ministers. One student later emerged as a feared warlord, while one of his colleagues even became the country’s president. During his many years in Liberia, the author travelled to every corner of the country, visited rubber plantations and iron ore mines, and spoke to managers and workers. In the capital Monrovia, he met political activists, journalists, ministers, civil servants and academics, from whom he learned about the country as Africa’s first independent republic, founded in 1847 by freed slaves from the United States of America.