Decoupling: a key fantasy of the SDG agenda 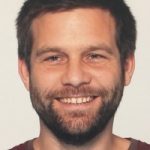 At the core of the new Sustainable Development Goals (SDGs) is the idea that economic growth (defined as money flow or market value) can be ‘decoupled’ from the physical growth of the economy (resource consumption) and the associated environmental pressures (degradation, pollution). Paradoxically, however, the concept’s main promoters admit that there is virtually no evidence that decoupling works, that the conceptual basis for it is weak, and that even if it were possible it is not politically feasible. Decoupling is, thus, a dangerous fantasy sustained by disavowal – the simultaneous admission and denial – of its impossibility in practice.

The curious concept of ‘decoupling’ is rapidly becoming central to the post-2015 global development agenda. It was endorsed by former UN Secretary General Ban Ki-Moon in his introduction to the Sustainable Development Goals, by celebrity economist Jeffrey Sachs, Ki-Moon’s key advisor on the SDGs, and by the Sustainable Development Solutions Network led by Sachs to oversee the implementation of the SDGs. It has also been promoted by other influential organizations such as the Ecosystem Marketplace and the New Climate Economy.

The concept of decoupling has been championed most strongly by the United Nations Environment Programme (UNEP) in two recent reports: Decoupling Natural Resource Use and Environmental Impacts from Economic Growth (2011) and Decoupling 2: Technologies, Opportunities and Policy Options (2014). 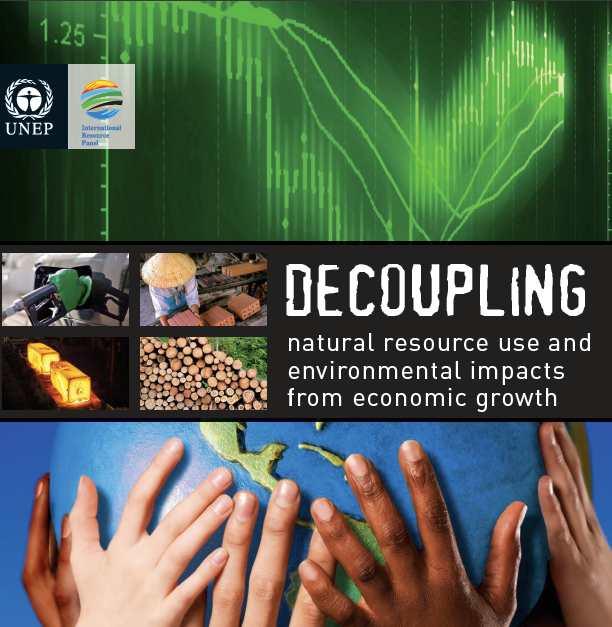 UNEP’s starting point is a distinction between economic and physical growth: the former refers to an increase in GDP or similar measure of economic value, the latter the material inputs that provide the basis for this value. The case for decoupling is then grounded in a series of key conceptual distinctions. The first is between relative and absolute decoupling. Relative decoupling is defined by UNEP in its 2011 report as a reduction in “the rate of use of (primary) resources per unit of economic activity”, and absolute decoupling describes an overall decrease in resource use even as the total economy grows. 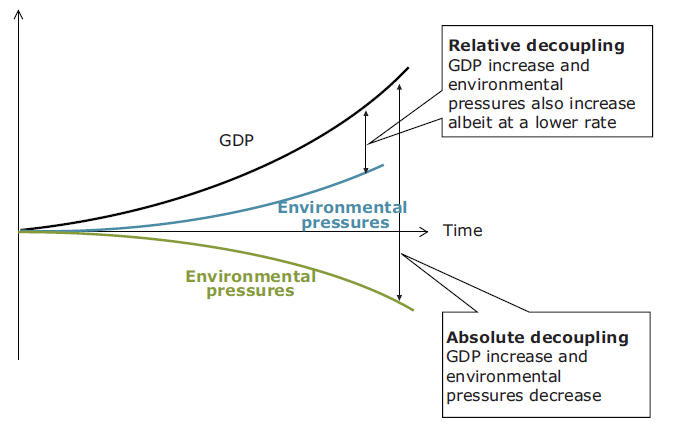 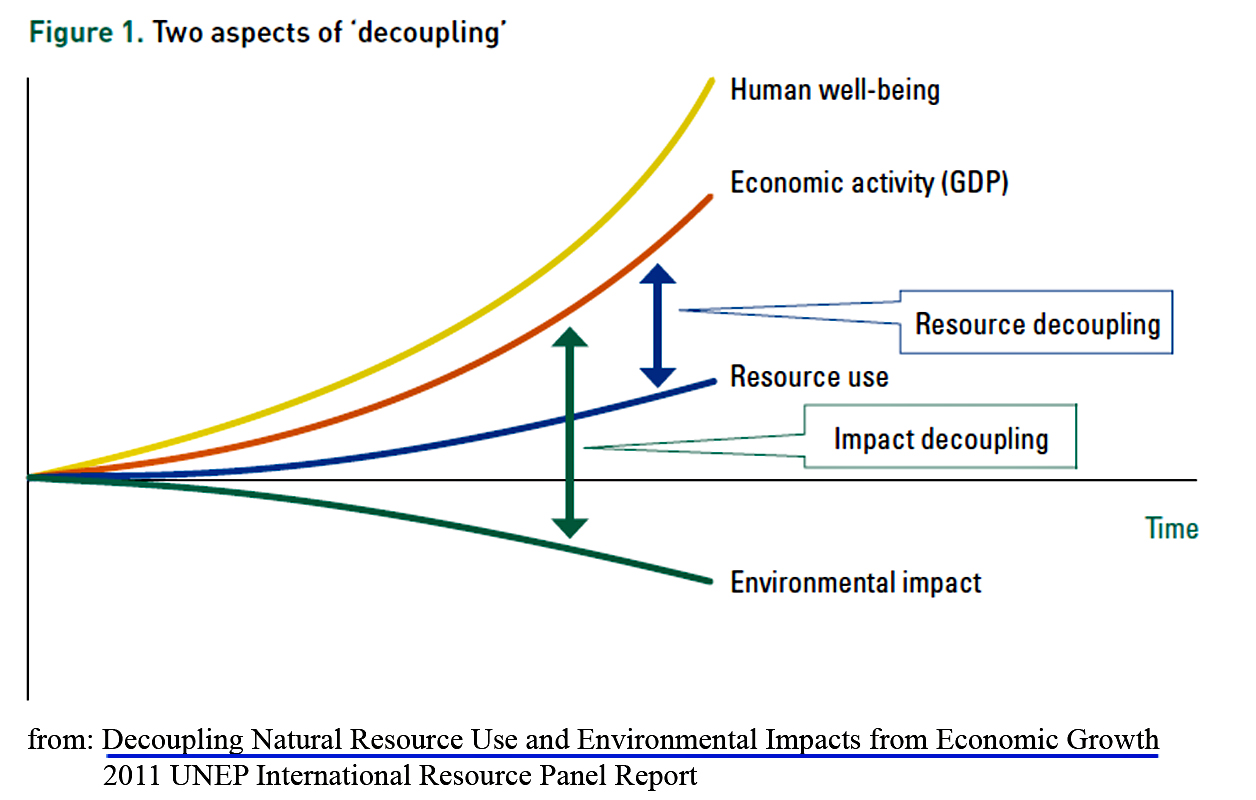 The third distinction made by UNEP is between material and immaterial resources: the former being those “whose value is characterized by the qualities that render it useful for certain applications”, the latter those “whose use has no effect on the qualities that make them useful” (examples of immaterial resources include “the song of a bird inspiring a composer” and “the shine of a star used by a captain to find his way”).

The goal is thus to promote ‘nonmaterial economic growth’ – a dynamic called dematerialization. In this way, UNEP asserts that “it becomes conceptually possible for economic growth (defined now as money flows, or value) to be decoupled from physical growth of the economy (resource consumption) and associated environmental pressures”.

Not only is decoupling possible, UNEP believes that it is essential in light of environmental limits. UNEP explicitly acknowledges “the limits to the natural resources available to support human development and economic growth”, yet asserts that growth is still needed “to generate employment for the soon to be two billion people either unemployed or underemployed”. Hence, decoupling is advanced as “a necessary precondition for reducing the levels of global inequality and eventually eradicating poverty”, while remaining within biophysical resource limits. Peter Hennike, one of the reports’ main authors, states elsewhere that simply “Staying within ‘planetary boundaries’ is impossible without decoupling”. Similarly, ecological economist Paul Ekins is cited as suggesting that decoupling in fact opens the “theoretical possibility of GNP growing indefinitely in a finite material world”.

A case of disavowal

Yet in its subsequent analysis, UNEP undermines its own case for this potential. First, the organization admits that “The conceptual framework for decoupling and understanding of the instrumentalities for achieving it are still in an infant stage”. It then goes on to say that, empirically, “it is methodologically very demanding to measure impact decoupling”.

Moreover, the limited evidence for decoupling that does exist appears to be less than promising. In particular, “Absolute reductions in resource use are rare … they can occur only when the growth rate of resource productivity exceeds the growth rate of the economy”. Even in places where some relative decoupling seems to have occurred, this may be offset by “a shifting of the material and environmental burden into developing countries” through offshore production.

Moreover, apparent decoupling may be further offset by a ‘rebound effect’, also known as the Jevons Paradox, in which “efficiency gains in resource use may paradoxically lead to greater resource use”. In sum, UNEP admits that “breaking the link between human well-being and resource consumption is necessary and possible but in reality is hardly happening” (.

These difficulties are compounded when politics enter the equation. In its 2014 report, UNEP envisions a “Tough contraction and convergence [that] would keep global resource consumption at its 2000 level, but redistribute the resources so all countries achieve roughly the same per capita metabolic rate”. Yet it acknowledges that this scenario “would be unlikely to be politically acceptable” and, thus, “can hardly be addressed as a possible strategic goal”, and “would not lead to an actual global reduction in resource use” anyway.

While asserting the need for dramatic decoupling if we are to have any hope of genuine sustainable development within a growth-dependent economy, in short, UNEP simultaneously admits that: 1) there is virtually no evidence that decoupling works; 2) the conceptual basis for even imagining it is weak; and 3) even if it were possible it is not politically feasible.

It is on such confused and convoluted premises that our hopes for a sustainable future increasingly rely. Decoupling offers a seductive fantasy of economic expansion without end. As with most fantasies, however, it is sustained by disavowal – a simultaneous admission and denial – in that even its most enthusiastic supporters all but acknowledge that the likelihood of achieving it are virtually nil. This fantasy’s grave danger lies in how it obscures the need to transition from an economy predicated on continual growth to one promoting widespread redistribution to address social inequity alongside resource degradation.

Robert Fletcher is Associate Professor in the Sociology of Development and Change group at Wageningen University in the Netherlands.


Crelis Rammelt is an Assistant Professor Environmental Geography and Development Studies at the University of Amsterdam (UvA) faculty of Social and Behavioural Sciences.