From an economic perspective, the middle classes can be defined in two ways: in absolute terms, referring to a specific income level which is equal for all countries, or in relative terms, which equate the middle class with the middle-income segment of a specific country. A common standard of the latter approach is former World Bank research economist William Easterly’s quintile division, which defines the middle class as the three quintiles between the poorest and the richest 20%.1 A disadvantage of this approach is that middle class income and consumption data differ per country, indicating a very broad scope of what might be termed middle class.2 Additionally, in very poor areas, the top 20% of the population which is ‘rich’ according to the Easterly standard practically lives in poverty: in rural India and Pakistan for example, the median poverty line of $2 (in terms of daily consumption) lies above the 80 percentile of consumption, indicating that those who have more to live on than $2 a day are richer than the middle class as defined by Easterly. By focusing on the growth of the middle classes in developing countries, this article therefore makes use of the absolute approach. It is important to emphasize here that there are many different absolute measures in circulation, and that the choice of range remains to some extent arbitrary.3 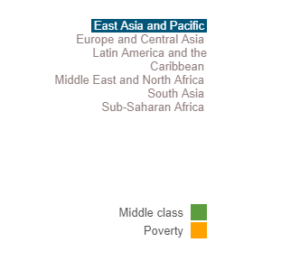 Taking different absolute standards which determine the middle class into account, it becomes clear that the lower bound or floor which marks the range of the middle class is especially important in assessing whether the middle classes are growing on a global scale. Take for example the paper by Branko Milanovic and Schlomo Yithzaki for the World Bank, entitled ‘Decomposing World Income Distribution: Does the world have a middle class?’. Defining the middle class using the mean income of Brazil and Italy, with $12 and $50 a day as the lower and upper bound,4 they conclude that the world lacks a middle class: according to this standard only 11% of the world population belongs to the middle class, with 11% being rich and 78% poor (earning less than $12 a day).5

The problem with Milanovic and Yithzaki’s approach however, is that it does not distinguish between population groups who earn less than $12 a day, but still might be termed middle class. Esther Duflo and Abhijit Banerjee (MIT) for example define the middle class in 13 developing countries in terms of daily consumption as either between $2 and $4 or $6 and $10 a day.6 While acknowledging that these amounts are still very low compared to the standards of developed countries, they also argue that those they define as the middle class are much better off than people living below the poverty lines.7 This has much to do with the fact that there are significant differences between these groups (i.e., below $2, between $2 and $4 and between $6 and $10). Duflo and Banerjee, for example, see the most important difference between the poor and the middle class as having a regular, well paying salaried job, a good job being one ‘that allows one the mental space that one needs to do all those things that the middle class does as well’,8 such as having fewer children and taking better care of their education and health. In this sense, they establish an important link between an economic approach to the middle class and the more sociological dimension related to it.

The growth of the middle class in the developing world should, however, be observed with caution. Martin Ravallion, for example, stresses that a large share of the developing world’s middle class still lives under precarious conditions. Ravallion uses a similar definition of the middle class to Banerjee and Duflo’s, while explicitly distinguishing between the ‘Western middle class’ and the ‘developing world’s middle class’. He defines the latter as those earning between $2 and $13 a day, ($2 marking the median poverty line for developing countries as defined by the World Bank, and $13 being the US poverty line). Ravallion notes that a large proportion of the 1.2 billion people who entered the middle classes according to this standard during 1990-2002 period (four-fifths coming from Asia and half from China) have remained close to poverty levels.9 The global growth of the middle classes cannot therefore simply be interpreted as a linear growth in wealth: although poverty has been successfully reduced in recent decades, this does not imply that poverty has vanished. As Ravallion emphasizes, ‘densities have become “bunched up” just above $2 a day’. In other words: large segments of this new ‘middle class’ still live dangerously close to the poverty lines. In the event of economic downturn, they are just as likely to fall back into poverty.10