Conflict management in Africa, and West Africa, seems to be dominated by international actors: the UN and EU deploy political and peacekeeping missions in Western Sahara, Côte d’Ivoire, Liberia, Sierra Leone and Mali, while the US and France send troops to Mali, the Central African Republic and Cameroon. Yet, remarkably little is known about the pivotal role that African regional organizations such as the Economic Community of West African States (ECOWAS) and the African Union (AU) have been playing in peace and security in Western Africa.

In Mali, both ECOWAS and the AU have played a key role in managing conflicts since early 2012. The Malian conflict has two main aspects1: the ongoing attacks by Islamist rebels from Northern Mali and the coup d’état in March 2012 and its political aftermath. From the beginning of the attacks by Tuareg rebels and Islamist groups from the North in 2011, ECOWAS intervened diplomatically aiming at establishing a dialogue between the rebels and the government. After the military coup, which, according to the putschists, was a reaction to the government’s inability to defeat the rebels, ECOWAS reacted immediately. Mali’s ECOWAS membership was suspended, shortly after it was suspended by the AU, which illustrates the rejection of the self-declared government by the two regional bodies.

Beyond national peace initiatives, peace and security in Africa are primarily managed by African regional organizations under the umbrella of the so-called African Peace and Security Architecture (APSA). The APSA is a complex, comprehensive collective security system and includes the AU along with several Regional Economic Communities (RECs) and regional peacekeeping training centres. The Protocol establishing the Peace and Security Council of the AU provides the legal foundation for APSA. The central APSA instruments – mirrored at the AU and the RECs levels – are the Peace and Security Council (PSC), Continental Early Warning System (CEWS), mediation structures, the African Standby Force (ASF) and the African Peace Fund. In West Africa, APSA is represented by ECOWAS. 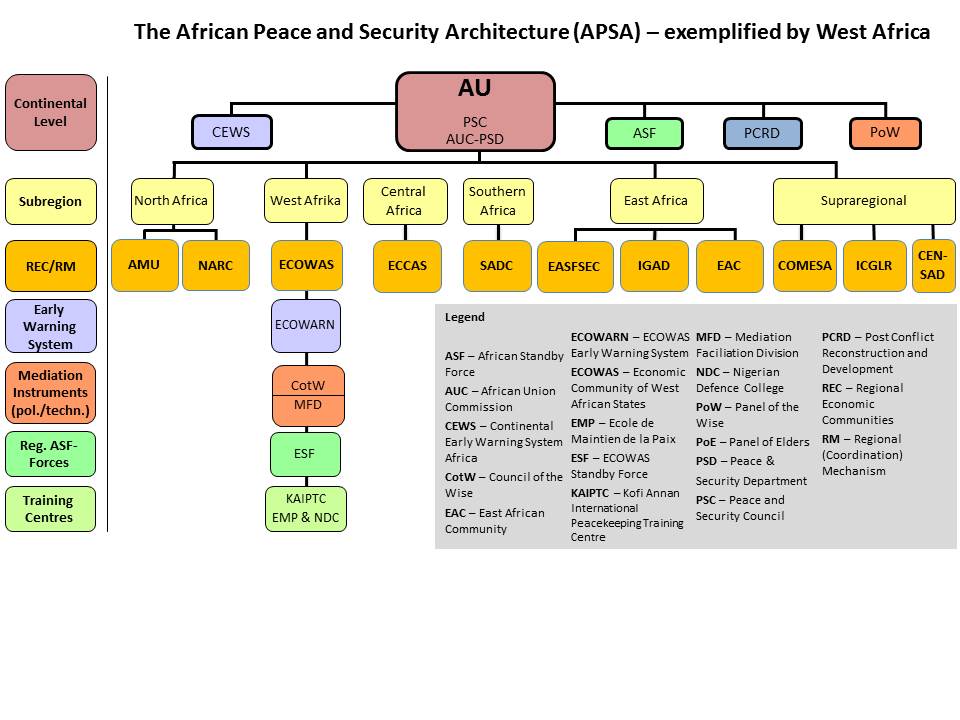 Diagram of the African Peace and Security Architecture. Source: authors.

ECOWAS also succeeded in mediating the formation of an interim government led by the putschists and the former Malian government in the short span of two weeks. The African-led support Mission to Mali (AFISMA), a mission planned by ECOWAS already in 2012, was deployed alongside the French Operation Serval2 and Chadian troops, following a foray by rebel forces in January 2013. In response to gaps in AFISMA’s financial and logistical capacity, also caused by the earlier deployment of its troops, the AU and ECOWAS called for the UN to support AFISMA. The UN Multidimensional Integrated Stabilization Mission in Mali (MINUSMA) took over, including most of the former AFISMA troops. In 2014, when the Malian conflict disappeared from global headlines, the AU continued engagement through its High Representative for Mali and the Sahel (MISAHEL). Thus, it can be seen that the APSA’s interventions have been successful in terms of diplomacy and mediation, but need support to effectively realize peace support operations, especially in terms of funding. The three years of civil strife in Mali ended with a peace deal between the Malian government and rebel groups in June 2015, in which non-ECOWAS member Algeria took the role of lead mediator. Even though ECOWAS did not play a decisive role in the peace agreement’s finalization, it paved the way for it to be signed.

When violent protests broke out in Burkina Faso in late October 2014 in reaction to president Compaoré’s attempt to amend the constitution to extend his 27-year rule, ECOWAS and the AU were quick to react: both ECOWAS and the AU Peace and Security Council expressed their concern and a joint ECOWAS-AU-UN diplomatic mission was dispatched to consult with Burkinabe political stakeholders. On 29 November 2015, Roch Marc Christian Kaboré was elected president in what is believed to be the country’s first free and democratic elections. The vote ended a year of unrest and violence as well as mediation efforts by a number of stakeholders.

During this year of unrest in Burkina Faso, ECOWAS was very vocal about not recognizing ‘any ascension to power through non-constitutional means’. It was also ECOWAS that, in November 2014, led the mediation process and, through a high-level delegation, secured an agreement with stakeholders in Burkina Faso for the immediate lifting of the suspension of the constitution, brokered the establishment of the interim government, and mediated after the attempted coup d’état of September 2015, leading to elections in November 2015. In sum, these interventions can be rated a success. Despite not being able to prevent violence, ECOWAS and AU mediation efforts have helped to contain the bloodshed – it does not bear contemplating what repercussions a protracted civil war in Burkina Faso would have had on the neighbouring countries Mali, Niger and Côte d’Ivoire.

In light of current events, the APSA might also be considered as an important tool for tackling the root causes of flight and migration. In the aftermath of the outbreak of violence in Mali in 2012, the number of refugees from Mali increased from 3,000 (February 2012) to 163,000 (August 2013). In the same year, the number of internally displaced persons (IDPs) reached 230,000. Remarkably, the number started to decline after the AFISMA/MINUMSA interventions to 139,000 Malian refugees by December 2015. As for Burkina Faso, quick and successful intervention by APSA likely prevented this issue altogether.

By establishing and operationalizing APSA, the AU and RECs show their commitment to finding ‘African solutions to African problems’. When it comes to peace and security operations, the APSA might not yet be strong enough to solely address all African conflicts – the role of non-African stakeholders in supporting the capacity building of the AU and RECs is, and will remain, important. Regarding diplomatic and mediation interventions, however, the APSA is already a crucial stabilizing factor, and its role in peace and security is larger than often perceived.

Bernadette Schulz is an economist.


Martina Bail works with the German Development Cooperation GIZ on peace and security in Africa.


Laura Kollmar is a lawyer by training.