Exorcising the Curse of Voodoo Economics

Books and blogs that debunk development orthodoxies regularly roll off the presses and show up on websites. Some of them knock down straw men, trot out hobby horses or serve up counter-mythologies. Reclaiming Development, however, avoids those pitfalls. A closely-argued critique of neoliberal economic policy, this is debunking at its best.  Republished now, ten years after its first appearance, the book has lost none of its relevance for students and those trying to re-direct economic policies away from their financialized doom-loops. 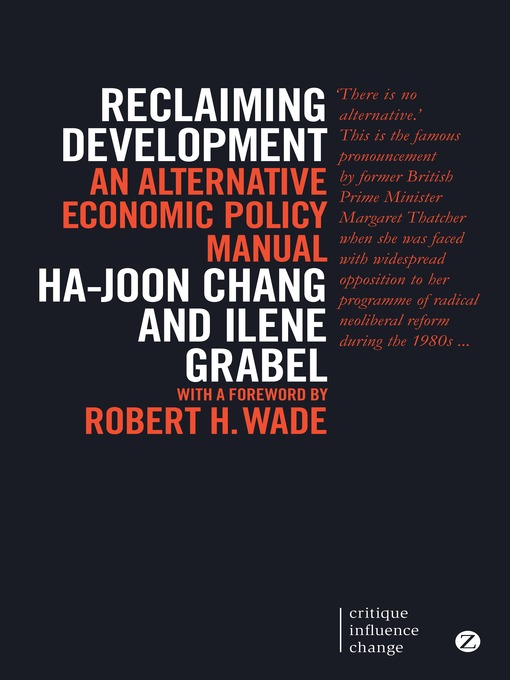 The book’s popularity also stems from the renown of the authors. Ilene Grabel, Professor of International Economics at the University of Denver, is known for her trenchant analyses of evolving global economic policy, especially that of the IMF. Ha-Joon Chang, Reader in the Faculty of Economics at Cambridge, is known for busting macroeconomic myths. His Kicking Away the Ladder (2002) Bad Samaritans (2007) and 23 Things They Don’t Tell You about Capitalism (2010) have won wide acclaim. The new edition of Reclaiming Development has a slightly larger format than the 2004 original, with wider margins for jotting notes. Otherwise, in the main text I couldn’t detect a single change of letter or page number.

The authors’ target is nothing less than neoliberal economic policy. Sometimes called market fundamentalism, and epitomized in the ‘Washington Consensus’, it continues to set economic rules and norms and a good deal of public management besides. Harder and softer versions of this doctrine have held sway since the late 1970s, when a ‘counter-revolution’ displaced Keynesian and state-led paradigms of capitalism. In 1980, an alarmed George Bush Sr. denounced it as “voodoo economics” . But to no effect. Since those words were uttered, a powerful and well-paid priesthood of think-tanks, publicists, academics, lawyers, accounting firms and business lobbies has worked vigorously to spread and ‘lock in’ the doctrine. They have defined ‘sound policy’ and demanded ‘reform’ based on articles of the faith. As a result, neoliberal precepts are today juridically anchored in statutes, treaties, even constitutions.

Authorities in the official aid-and-development world were among the early converts and proselytizers. Some Scandinavian donors initially showed some misgivings, and in parts of the UN system there has been open dissent. But few aid officials have shown an urgent need to question the Thatcherian edict that ‘there is no alternative’.

That claim to know the One True Path may have been mere bluff, but if meant in earnest it suggests wilful ignorance. For as the authors amply demonstrate, there are alternatives. Often numerous ones. And they are not merely hypothetical. Some of the world’s strongest economic performers have followed policies that flatly contradict Washington orthodoxies. Found mainly in Asia, but also in Latin America, they are renegades hiding in plain sight.

The book’s first part consists of six short chapters. These describe and then demolish claims made for neoliberal ideas, namely: that free trade and free financial flows explain the prosperity of rich countries; that today’s neoliberal policies are delivering fast, fair and sustainable growth; that globalization’s techno-organizational advances are inseparable parts of the neoliberal package; that American-style capitalism is the ideal to which all should aspire; that the success of East Asia’s economic model cannot be replicated, leaving the Anglo-American model as the only viable option; that economic policy-making is best left to the international financial institutions (IFIs) and to national financial bodies (mainly central banks) insulated from public control.

In the book’s second and longer part, the authors spell out alternatives in a number of policy terrains. They decline to make caricatures of neoliberal arguments; indeed they take pains to explain them objectively, paraphrasing terms and arguments used by neoliberals themselves. They then show how and why those arguments fail to stand up to close scrutiny. That is not terribly difficult, since the inconsistencies, distorted logics and the disconfirming cases are many. For in terms of rapid, steady and especially equitable economic growth, the track record of Washington Consensus policies has been weak and often counter-productive. Those who have taken alternative paths, notably most economies of the North Atlantic and a number of successful ‘renegades’ today, have done much better.

Having shown why Washington Consensus doctrines should be rejected, the authors conclude by outlining policies that can make a positive difference. They are careful, however, not to make sales pitches for new orthodoxies. Instead they ask that alternatives be probed and debated, preferably using public processes, before taking decisions for the longer term. Such transparent, politically-informed approaches would, if carried out, be wholly different from the neoliberals’ standard operating procedures, which can resemble a kind of ‘market Leninism’: coercive imposition of uniform diagnoses and uniform prescriptions by powerfully-placed members of an unaccountable priesthood. Typical is an utterance by one high priest, Lawrence Summers, then a senior economist at the World Bank: “Spread the truth: The laws of economics are like the laws of engineering. One set of laws works everywhere”. Rejecting such one-size-fits-all nonsense, the authors call for respect for sovereign ‘policy spaces’. They modestly note elements of their proposals that are uncertain, and insist that policies must be tested, adjusted, and even mixed with others, to fit contexts.

The authors present alternatives to market fundamentalism in five fields.

First, against IFI insistence on the virtues of economic openness (‘free trade’) and the evils of state orchestration of development, the authors point to evidence that the neoliberals’ free trade axioms are oversold, inconsistent with history and full of risks, especially for low-income places trading with industrialized countries. There are solid conceptual and practical options, exemplified mainly by cases from Asia.

Second, against official and private sector insistence on the urgency of privatization and of protecting intellectual property rights, the authors provide evidence that their economic benefits have been seriously exaggerated, that socioeconomic costs have been under-reported, and that reforms are viable.

Fourth, against warnings that governments should not involve themselves in banking and other branches of the financial sector, the authors point to evidence (already abundant well before the financial crisis began in 2007) that financial sector liberalization leads to increased speculation, higher risk of financial crises and greater disparities of wealth, income and power.

Fifth, neoliberal doctrine holds that national currencies should float on global markets and should ideally become fully convertible; that central banks must be wholly independent of public control and should pursue price stability before all else; and that governments must strive to minimize expenditure. Against those axioms the authors offer evidence that those measures yield far fewer benefits than advertised and can often be counter-productive in terms of steady, equitable growth and development.

When first published in 2004, this book’s grounding in facts, and thus its arguments, looked strong. Ten years later they seem stronger than ever. For from subsequent academic research, investigative journalism and even publications from the commanding heights of the aid-and-development system, there is today even more evidence validating the book’s arguments. Meanwhile findings that might put those arguments in question appear to be scarce. Or so it seems to me, a non-specialist observer who tracks development debates as best he can. To mention just two examples of disconfirming findings from within (and evidently now accepted by) the IMF: One, that financial liberalization does not boost economic growth, indeed it may slow it down by adding to economic inequalities; and two, that trade liberalization reduces government revenue, often radically, especially for the poorest countries.

However, the book misses some opportunities to drive its points home. It neglects the crippling outcomes of neoliberal ‘shock therapy’ in countries of the former Soviet Union, Eastern Europe and North Africa. More importantly, it confines its discussion of privatization largely to one realm, namely state-owned enterprises. It omits the reconfiguration of public and private spheres, a continuing thrust that impacts on state-society relations. The Washington Consensus instruction sheet on public services, for example, discourages their provision as entitlements. Rather, it requires their being put up for sale as commodities in a ‘market’. Access to public goods thus becomes a matter of purchasing power, not of rights. The consequences of such measures – such as user fees for health services – have been adverse, especially for poor people.

The book might have discussed that dimension, and related paradigms such as New Public Management, which require governments to operate like businesses, and citizens to become ‘clients’ or ‘customers’. This commodification and marketization of public life are also fundamental to neoliberal development policy.

The authors have no doubt useful and interesting things to say about those matters; they could have created space for them by cutting back on, say, the space they devote to some arcane aspects of exchange rate and currency policies, a topic getting a very generous sixteen pages.

The foregoing remarks suggest the need for a companion volume, one focused on the politics of neoliberal development. If neoliberalism is essentially a political project, rather than the technical implementation of a set of economic formulas, such a sequel would be logical. For the authors are attuned to politics. In their Preface, they allude to the importance of (geo-) politics by terming their earlier assessment of possibilities for alternatives as “overly pessimistic”. Since 2004, they have detected “shifts of power in the governance of the global economy” and the emergence of regional blocs, creating “economic multi-polarity”. They observe policy-makers in (successful) developing countries “conducting themselves in an increasingly assertive and autonomous fashion”.

If momentum is gathering to defect from neoliberalism, and thereby to reclaim development, transnational shifts of economic power are clearly major drivers. But however important sheer economic muscle may be, it seldom eclipses the steady accumulation of knowledge, of innovations and of interests constructed on the basis of ideas. Today, the neoliberal paradigm lives on, and reports of its death have been greatly exaggerated. Yet it is losing its persuasive faculties. When the time comes to draw up a forensic study of what brought on its demise, books like this will surely merit honourable mention.