While total population growth is important for the socio-economic prospects of countries, the age structure of the population is just as crucial.

By 2035, sub-Saharan Africa’s population will still be the youngest in the world. At the same time, the share of working-age individuals (aged 15 to 64) relative to the non-working-age population is increasing, which is good news for the economy.

A persistently large share of children and young adults (aged 15 to 29) is a financial burden and comes with a series of social risks. Governments face huge public expenditures for healthcare, education and basic services. In addition, they need to invest in skills development for young adults and create jobs for when they enter the workforce. Moreover, youthful populations portend an increased risk of social instability. In the African context, widespread unemployment and other forms of socio-economic and/or political marginalisation will compound this risk.

During this process, the share of the working-age population increases relative to the economically dependent (children and the elderly) population. This so-called demographic dividend has the potential to unlock economic growth.

Sub-Saharan Africa in general and West Africa in particular are latecomers to the demographic transition. High fertility rates, paired with high death rates, mean that the onset of the demographic dividend is delayed in comparison with other world regions. This has negative implications for economic growth and development. Most countries in sub-Saharan Africa have fewer workers supporting a larger proportion of the population (mainly children) than in other developing regions.

Yet, as Africa’s population ages, the ratio between working-age individuals and the economically dependent population will change for the better.

A larger labour force as a share of total population translates into increased productive capacity and can help to boost savings and investment. And even though future global economic expansion will probably be driven by technological advances, Africa’s lower middle-income and low-income economies still have a lot to gain from their expanding labour force over the coming decades.

However, most countries in West Africa have yet to experience the dividend, mainly because fertility rates remain stubbornly high while life expectancy continues to increase.

For example, Nigeria is forecast to see its fertility rate decline from 5.4 children per woman of childbearing age in 2017 to 4.4 in 2035. This means it will see improvements in the ratio between the country’s working-age population relative to the elderly and children. Yet the so-called demographic ‘sweet spot’ is still only expected to peak around the mid-2080s. 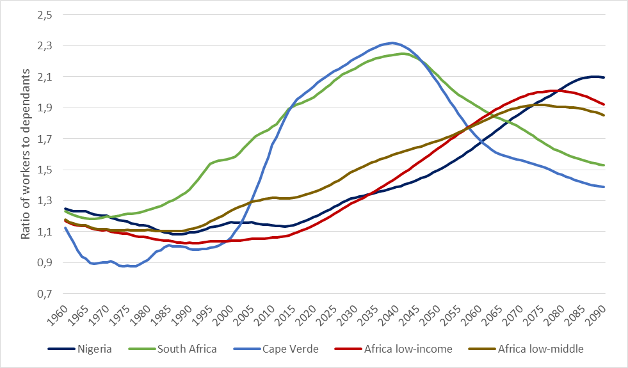 African countries that have already entered the demographic ‘sweet spot’ are mostly upper middle-income economies in Southern and North Africa.

Cape Verde, a lower middle-income yet highly urbanised economy, is an exception. With fertility rates around replacement level, the West African country is experiencing a demographic dividend that is likely to hold over the coming five decades or longer. Figure 2 compares the demographic dividend of Nigeria, South Africa and Cape Verde with the average for Africa’s low and lower middle-income groupings.

It is possible to speed up the demographic transition in West Africa’s low and lower middle-income economies to create greater opportunities for economic growth and development. If countries in the region dramatically reduced these over the coming two decades, they could benefit from an earlier onset – as well as a larger – demographic dividend and, with the right policies, capitalise on it to boost growth (see Figure 3). 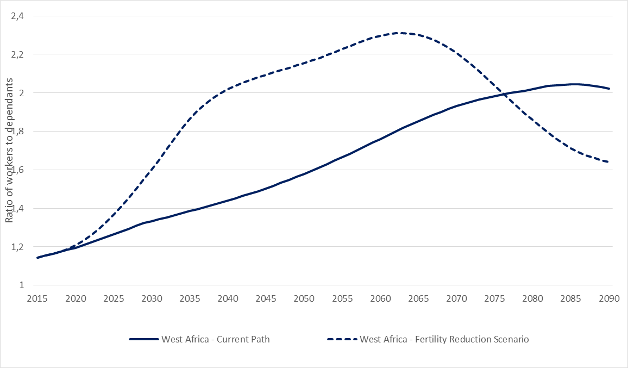 The measures that can reduce fertility rates include improving secondary female education and putting in place family-planning initiatives, including increased availability of contraceptives.

Both Ethiopia and Rwanda are good examples where dramatic drops in fertility were achieved over relatively short time horizons after adopting such policies. The general increase in the standard of living also played a role. Under a scenario of reduced fertility rates, governments spend less on health and education – since there are fewer children – along with reduced spending on the provision of basic infrastructure. Countries can then strategically invest these resources to improve productivity, prepare for future shifts in demographics (i.e. ageing) and invest in technology.

Seen from a global perspective, Africa’s demographic potential is unparalleled. However, seizing the demographic dividend will be an uphill battle.

In many cases, extremely rapid population growth is set to compound poverty and lack of economic opportunities. Many governments do not currently invest adequately in human capital (education and training) and struggle to create jobs for a growing workforce. Unless they do in the future, this demographic change story will be a tale of missed opportunities.

This expert opinion was originally published at ISS Today, an online publication of the Institute for Security Studies. The piece has been altered from the original.

Julia Bello-Schünemann joined the ISS Pretoria office in January 2013 as Senior Researcher and Project Leader for African Futures and Innovation.