The impact of financial globalization on work

In many countries the share of labour in national income has declined over the last three decades. As a result, the low and middle-income groups of people who depend the most on wages for their income are crumbling. Meanwhile, the rich elites who depend more on profits from capital investments than on wages are flourishing. At the same time, income earned from capital investments is taxed less than labour income, resulting in greater inequality.

When governments announce GDP growth rates, they usually don’t mention that this GDP growth is often unequally distributed with either employment growth or wage growth, or sometimes both, lagging behind. Economists call this ‘the decline of labour share’, or sometimes ‘wage share’. What they are referring to is the part of the national income received by wage earners, including the incomes of self-employed workers and farmers. This labour share declined in most countries, including in both developing and developed countries, over the last three decades. This means by definition that the share of capital (or profit share) in national income is increasing, and includes income from capital, like dividend and profits from investments, but also rents from property and land. As a consequence economic growth increasingly depends on capital instead of labour.

The distribution of income between labour and capital has always been an important topic of debate for economists, starting already with the classical economists (like Adam Smith, David Ricardo and also Karl Marx). However, in the second half of the 20thcentury the issue remained in the margins of economic debate. This was mainly because the neo-classical economists (like Paul Samuelson) often assumed the labour and capital share in national income to be constant. They assumed that a modest increase in the share of wages and salaries in national income appeared as a result of more people moving into wage jobs, leaving their smallholder entrepreneurial incomes. This already began before World War II, but it accelerated after the war. 1 However, now that the labour share is declining, the subject is an emerging issue in economics today. 2

The late Andrew Glyn argued in 2009 that distribution between labour income and capital income matters to people for at least two reasons.3 First, despite families’ broader access to capital (for example mortgages), the rich have much easier access to capital, especially the ones with the highest margins of profit. Hence, earning an income is still extremely unevenly distributed in societies (see The Broker dossier on inequality). Second, Glyn argued that the fact those profits may be rising much faster than wages conflicts with widely-held views of social justice and fairness.

The International Labour Organization’s (ILO) Global Wage Report uses a dataset encompassing developed, developing and emerging countries to investigate the decline in the labour share.4  The ILO found that the average of labour shares in 16 developed countries for the 1970-2010 period declined from about 75% of national income in the mid-1970s to about 65% in the years just before the global economic and financial crisis (see figure 1). At the same time,average labour productivity in developed economies increased more than twice as much as average wages between 1999 and 2011. Take for example the United States. Since 1980, the real hourly labour productivity in the non-farm business sector increased by about 85%, while real hourly compensation in wages increased by only around 35%. In Germany, labour productivity surged by almost a quarter over the past two decades while real monthly wages remained flat.

In developing countries the labour share is lower in comparison with the developed countries, as many people work in the low-remunerated subsistence sector. However, the average of labour shares from a group of 16 developing and emerging economies also declined from around 62% of GDP in the early 1990s to 58% just before the crisis (see figure 2). Even in China, a country where wages roughly tripled over the last decade, GDP increased at a faster rate than the total wage bill. Hence the labour income share went down from 65% in 1992 to less than 50% in 2008. 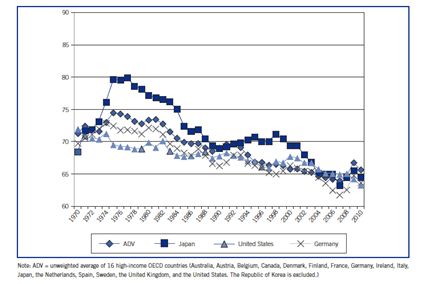 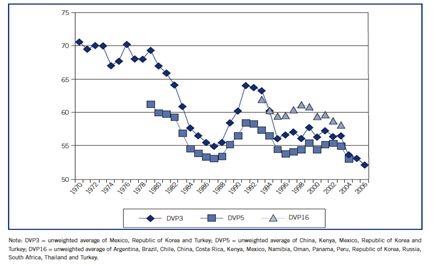 The decline in labour share is caused by a decline in jobs and wages. One of the main reasons for the declines is the increasing role and impact of the financial sector on the economy. According to the ILO’s World of Work Report, this happens in both developing and developed countries.5  The increasing importance of the financial sector in the economy is what economists call ‘financialization’.6  Due to financial liberalization financialization is a global trend without borders, where money is moved from one country to another.

The ILO report argues that the switch in the 1980s to corporate-governance systems based on maximizing shareholder value and the rise of private equity funds, hedge funds, institutional investors, and investment banking put pressure on firms to increase profits, especially in the short-term. Such investors in the financial sector have to be pleased and have become more important for making profits. However, profits are reinvested less in productive sectors where labour can benefit, and more so in capital markets. Some groups of workers, particularly top executives, may have benefited from this process of financialization through deferred salaries in the form of pension funds and other types of capital gains, such as bonuses expressed in shareholder value.7 For the average worker, though, the evidence indicates that the extent and size of such gains are much more limited.8 Financial globalization has especially weakened workers’ bargaining positions as capital is much more mobile and can move more easily to other regions (see the articles, ‘Revaluing labour’ and ‘Creating a global labour market’ in this dossier).

Similarly, in middle and low-income countries, the growth of international financial transactions and international capital flows– a higher degree of ‘capital account openness’ in economic terms and one aspect of financialization–is associated with a larger decline in the labour share.9 The capital account openness has resulted in ‘boom–bust cycles’, leading to economic uncertainty, slow employment growth and stagnant wages. These results confirm an earlier observation that financial crises are associated with sharp declines in the wage share. This also underscores the point that the cost of financial instability has fallen disproportionately on labour.10

So, according to these findings financialization is by far the most important reason to explain the decline in labour share all over the world. However, there are more causes, like trade liberalization and technical change that are also mentioned in most economic literature. The ILO also recently investigated11 the influence of the declining welfare state and less bargaining power due to the diminishing influence of trade organizations as factors of change in the labour income share in GDP.12

In the case of developed economies all these factors contributed to the fall in the labour income share over time, with financialization playing the largest role. In terms of relative contribution, finan­cialization contributes to 46% of the fall in labour income shares over the last three decades. In comparison, trade liberalization and technology respectively contribute to19% and 10% of the fall. The explanation is that trade liberalization forces large groups of workers to compete on a global level with lower wages, resulting in less bargaining power. When production relocates to other countries, some workers can find professional jobs in the service sector. However, most workers can not find professional jobs and see their wages plummet in low-skilled service-sector work. When production or services do not move out of the country, then automation is a threat. Technology takes over the work that was previously done by workers (see also the article, ‘Revaluing labour’ in this dossier). In addition 25% of the decline in labour share is due to downward changes in government expenditures, like cuts in welfare systems and fewer civil servants. The diminishing influence of trade unions in a globalizing world economy also contributes to the declining labour share.

In the case of developing economies, a positive impact of technology on the labour share can be observed. The ILO describes it as a ‘catching up’ effect of economic growth, with the positive impact being an increase in demand for skilled labour. For the longer term it is expected that technology and especially automation will have the same negative effects as have been observed in developed countries. Until now, this positive effect of technology only partly offsets the adverse effects of financialization, globalization and the shrinking welfare state in developing countries. Never­theless, as has been the case for developed economies, financial­ization stands as the single most adverse factor in terms of explaining the decline of labour income shares.

In addition to these variables it has been observed that increases in unemployment (see article, ‘Fragile employment’ in this dossier) have a further strong nega­tive impact on the labour share, mainly as result of down­ward pressure on wages and the weakening of workers’ bargaining position. Despite some optimism regarding the end of the current slump in industrialized countries, one cannot foresee a rapid decline in unemployment. The decline in bargaining power will therefore remain, but will not affect the small group of highly mobile professionals around the world. 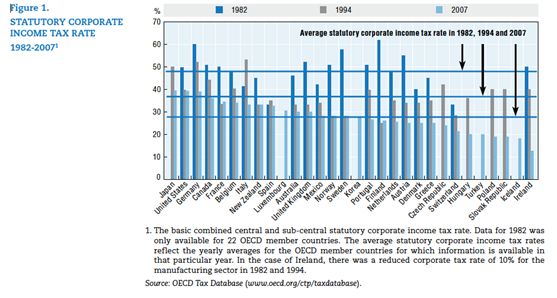 In the wake of the global recession corporate tax rates  declined even more. For some countries, like the Netherlands, the figures are even more striking with a decline from 8.4% to 5.4% between 2007 and 2011.13

Although the share of capital income in national income has increased, capital income is continuously taxes less than labour income. A most likely explanation for this lower taxation is that labour, through impediments on migration, is less mobile than capital. Capital owners exercise greater power on national governments to lower corporate taxes, because they can threaten to move to another country taking their capital with them. And taxes on labour make it more expensive therefore hampering the demand for it. International coordination of corporate tax rates is thus a necessary and logical reaction to growing financialization.

The growing unemployment of low-income workers in developed countries also warrants a restructuring of the current international tax structure, with higher taxes on capital, corporate income and consumption, especially on luxury goods.14 The tax system needs such changes to facilitate the reinvestment of corporate profits into the real economy, where workers can benefit from more job opportunities and labour market investments.

The decline of the labour share in national income, caused by financialization, globalization, and technology, and diminishing welfare states especially in industrialized countries– combined with an increase in the share of top incomes in most countries–has contributed to growing wage inequality. This is creating a higher concentration of capital and is threatening social cohesion and inclusive development.15 Societies and policy-makers alike have to deal with these tremendous challenges.

A new vision on the labour market is needed– one where profits are shared among workers, where labour is taxed less and where low-skilled workers are able to maintain a decent standard of living and consumption through a system of negative income tax. All these changes in the labour market should be carried out in tandem with fiscal, monetary and industrial policies which have employment creation as an integral objective.

Rolph van der Hoeven is Professor on Employment and Development Economics at the International Institute of Social Studies.