Putting the Social Contract at the Heart of Peacebuilding and Statebuilding

An old yet surprisingly relevant political idea – the social contract — is today making the running in the competitive world of aid and development paradigms. Alternatives to the social contract have long been wheeled out in the name of peace and progress  – think of imperial rule, technocratic fixes, intervention and occupation by force of arms;  but these have generated counterproductive and often catastrophic results.  So it’s a no-brainer: a decent social contract is a good idea, especially where the social fabric is in tatters and violence looms.

The social contract holds, roughly speaking, that if elites and common citizens agree mutual roles and responsibilities, social strife can be curbed and prosperity promoted. Most places lacking state-society reciprocity risk collapse into law-of-the-jungle brutality. Why such an obviously relevant idea has been ignored in the aid-and-development system, now approaching retirement age, is a mystery. However in mid-January, with their attention riveted on crises unfolding in real time in South Sudan, Central African Republic, Congo and elsewhere, that question did not detain many of those attending a three-day conference held outside New York city: ‘Shaping the State through the Social Contract in Situations of Conflict and Fragility’. Organized by UNDP’s Bureau for Crisis Prevention & Recovery (BCPR) together with the Norwegian Peacebuilding Resource Centre (Noref), this ‘Expert Practitioners’ Meeting’ brought together more than a hundred policy staff from the UN, European donor agencies, several American and British academics and assorted specialists from conflict and peacebuilding thinktanks.

The meeting’s organizers wished to clarify the relevance, principles and implications of the social contract approach, and to explore how UNDP could operationalize it and track results. For UNDP-BCPR the conference marked a further step in marshalling a policy coalition, building on efforts begun several years ago, as reflected in Governance for Peace. Securing the Social Contract (2012). These efforts have highlighted responsive institutions that deliver wanted services and promote inclusive processes of state-society dialogue. A major innovation of the social contract approach is to acknowledge the importance of, and to welcome, public politics. That can upset a good many apple carts. Up to now, prevailing approaches to governance have stressed technocratic formulas and ‘best practices’, including New Public Management measures whereby governments are supposed to resemble, and collaborate with, corporations. For many mainstream bodies, to question those orthodoxies can mean thinking the unthinkable. Taken to logical extremes, responsiveness can imply statutory redistribution of income and assets, and inclusive politics can mean inviting ‘terrorists’ into routine political life.

The ‘Shaping the State through the Social Contract’ conference took place under Chatham House rules, which forbid public attribution of anyone’s remarks made during the event. My fragmentary impressions, all non-attributable, include the following :

How political settlements work – or not – got a lot of attention. The ‘elite pact’ or ‘elite bargain’ met with widespread scepticism, if not outright rejection among participants, who see such arrangements as ‘top down’ and hard to sustain. A case in point is South Sudan’s recent political breakdown. Positive words were heard about ‘bottom up’, ‘inclusive’ peace processes, which work ‘horizontally’ with ‘social covenants’ and bring women and minorities on board. But concrete cases of such processes and the methods needed to move with deliberate speed, were seldom mentioned.

Inclusive economic policies were noted in passing. In peace settlement processes, what issues are on the negotiating table can be even more important than who sits at the table. For example in the 1979 negotiations on the new Zimbabwe, land, industrial assets and pensions of colonial civil servants were kept off the table — issues that later returned to destabilize the pact among elites. Remarkably, few participants talked about a central component of a resilient social contract, namely the creation of decent jobs. However one concluding speaker emphasized that the robust legitimacy of governments like those of China is a direct function of their having delivered jobs, especially for low-skilled people.

Presentations about popular views of state responsiveness and legitimacy added a sense of concreteness to discussions. Valid survey data are still scarce, and what data there are do not begin to approach the quality regarding, for example, health and health care. Moreover, ruling political classes are often fearful of survey findings; some commission surveys prettify things and justify claims to legitimacy. The politics of monitoring social contract performance will usually be highly contested.

The conference’s field of attention was resolutely held to territorial levels. There were perfunctory remarks about the need for donors to ‘do no harm’, but the broader array of transnational actors pursuing economic, military and cultural agendas was hardly mentioned. A compelling verbal update on the crisis in South Sudan took note of the fact that $4 billion of that country’s oil revenues have been looted. However there were no remarks about the transnational mechanisms of that theft and its delegitimizing effects.

Also striking in an event shaped by UN concerns about fragile states was the absence of another UN-driven paradigm, ‘human security’. Use of this term, vigorously promoted within the UN system, could not be detected in the conference proceedings or documentation.

Even more striking was the neglect of really existing social contracts today. For those are under severe pressure, or being dismantled outright. As is now painfully apparent in Greece, Portugal and other parts of Europe where malnutrition is now rising, state-citizen social contracts can no longer be taken for granted. Meanwhile, regarding low-income and violence-prone parts of the world, damage to social contracts wrought by market fundamentalism was passed over in silence. That was a missed opportunity, and an intellectual evasion, since many of the pathologies to be remedied in fragile situations have been driven, logically, by anti-social contract policies. Perhaps UNDP’s own political and financial circumstances – which might be termed a ‘situation of fragility’ – may help account for the failure to analyze and denounce today’s orthodoxies.

At the conference’s conclusion, the message from the current leadership on the fronts of crisis prevention and recovery in UNDP was made quite clear: the social contract is a guiding concept at the heart of policy. It may need some further adjustments, particularly to put it into practice at country levels, but with patient and pragmatic steps – ‘crossing the river by feeling the stones’, a Chinese saying used by one participant – it can help move public politics out of the aid system’s margins and thereby help build state authority and legitimacy as fundamental to peace. 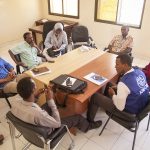