Social protection can be a stabilizer during a crisis as well as kick-start domestic demand. Global calls for introducing social protection programmes in developing countries are based not only on moral grounds, but increasingly on a belief that it is an important instrument for economic growth.

Few people would disagree that the majority of humanity now living without social protection has the right to health care, education, a pension scheme and financial support in the event of job losses, bad harvests, sickness or invalidity. This moral consensus, however, does not help the world’s poor. Safeguarding human rights, including the right to social protection, is an obligation of states. National governments are, however, often reluctant to introduce comprehensive social protection schemes because these are deemed too expensive. Rising levels of inequality and recurring crises present a renewed opportunity to discuss an expanding role of the state in economies and in promoting social protection

Social protection on the agenda

In the development debate, social protection emerged as a critical response to the ’safety-nets’ approach of the late 1980s and early 1990s. Safety nets were part of structural adjustment policies and provided minimal social assistance in countries too poor and administratively too weak to introduce comprehensive social welfare programmes. Such safety nets were short-term, temporary, discretionary and residual policy instruments, while social protection measures are long-term, guaranteed, entitlement-based and part of mainstream government policy (see also ‘Social protection as a global challenge’).

The question how social protection and the welfare state affect a country’s economy has long been an issue of academic and policy contention. Economic analyses that look at short-term financial sustainability and spending tend to consider social protection measures mainly as a cost. However, an increasing number of researchers now argue in favour of looking at the role of social protection in the economy in a new way, not only as a cost but equally as an economic investment, if properly designed. 1 This is of particular interest to developing countries. Professor David Hulme, of Manchester University, states that policy-makers are increasingly interested in the links between social protection and growth, because evidence shows that such programmes, in particular cash transfers, can reduce poverty and, through sustained income, can promote social mobility and contribute to a permanent exit from poverty. 2

Recent reports from international organizations like the World Bank, the OECD, the European Commission, UNRISD and UNICEF argue that social protection can indeed play a role in stimulating the economy, especially in times of recession (see The Broker’s overview of resources). The belief that social protection might have a positive impact on the economy has gained impetus with data suggesting that countries with a social protection scheme in place have come better out of recent crises. According to a 2012 background paper for the World Bank, 3 social protection is now seen as something that can contribute to economic growth as well as reduce poverty. Research compiled by the ILO suggests that it was social security schemes that enabled South Korea, Argentina and Indonesia to emerge strengthened from crises in the past decades. 4 For example, the government of Indonesia introduced a social protection programme as the financial crisis doubled the poverty rate in 1997. This programme resulted in a reduction in the poverty rate from 33% in 1998 to 12% in 2002. According to a policy briefing from the Institute of Development Studies, 5 evidence suggests that recovery in this timeframe would not have been possible without the programme and the reduction in poverty it created. 6

The 2012 World Economic Forum, meeting in the context of the global financial crisis, made the case for what it called ‘a new approach to growth’, which emphasizes the importance of social protection. 7 It argued that social protection can act as an economic stabilizer during a crisis, and that it can kick-start domestic demand, which will speed up exit from the crisis and reliance on export-led growth. 8

Perhaps the most prominent economic argument is that social protection has a positive impact on productivity. The idea, similar to the economic reasoning behind the foundation of welfare states in Europe, is that people are more productive if they have access to health services, nutrition, education, social assistance, etc. This view sees short-term social spending as “incentives for long-run investments in human capital” 9 (see also Protect or Promote?). 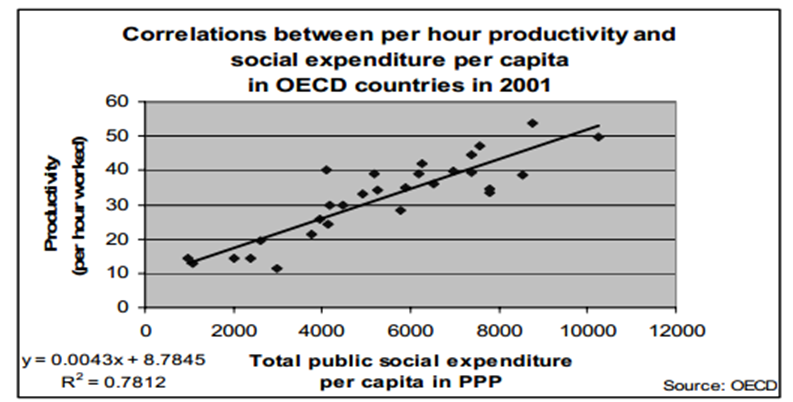 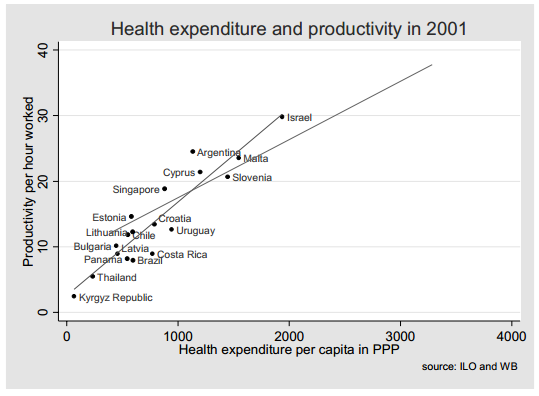 Evaluations of social protection schemes around the globe indicate strong effects on human capital. Evaluations of the Transfer Project coordinated by the FAO in 13 African countries, for example, show a large increase in human capital, including better dietary diversity, food security, education and health care. 10 An impact evaluation of the LEAP programme in Ghana, a non-conditional cash transfer programme that targets the poorest households, similarly shows a positive impact on human capital, especially in the area of education (increased enrolment, reduced absenteeism). 11 One important finding is that poor people can use transfers not only to smoothen consumption, but also to maintain their livestock and other assets. Ethiopia’s Productive Safety Net Programme, for instance, enables the poorest to make such investments, which links the programme directly to agricultural productivity.12 The LEAP evaluation showed that in fact cash transfers had very little impact on people’s food and non-food consumption, but were instead used to invest in non-consumption items with the goal of managing risk: increasing savings, paying down debts and re-engaging with social networks. An evaluation of the Expanded Social Protection (ESP) programme in Uganda showed increased food production and increased productive investment in livestock and in micro-enterprises. 13 Social protection programmes thus promote growth not only by injecting capital, but also by promoting empowerment and entrepreneurship: poor people can rarely access credits and loans and are therefore limited in making productive investments. Social protection programmes can help change this.

Social protection in this sense clearly has a longer-term perspective, not least in terms of helping today’s children become productive members of tomorrow’s society. The Economist reports from Brazil that “recipients of the Bolsa Família keep their children longer in school—and that those children end up better educated and eventually in better jobs”. 14 Brazil’s social insurance and social assistance programmes, of which the Bolsa Família programme – started in 2003 – is the most well-known, have received much praise from the international development community. There is a fast growing demand from countries, especially in Africa, to learn about the Brazilian programmes, says Fabio Soares Veras from the International Policy Centre for Inclusive Growth. 15

Giving the poorest people more disposable income is likely to increase a society’s total demand – because the poor save less and spend a larger proportion of their income – and thus help boost production. This is linked to the theory of how income taxes and welfare spending can boost income and ensure consumption. The positive role social protection can play during economic crises is linked to the fact that it is by nature counter-cyclical: it pumps more money into the economy when the economy has a downturn. This has similar macroeconomic effects to monetary policies, such as decreasing interest rates, as it effectively injects money into society, which can help the economy stabilize and recover. These ‘automatic stabilizers’ stabilize aggregate demand and dampen fluctuations in real GDP during downturns. Isabel Ortiz of Joseph Stiglitz’s Initiative for Policy Dialogue writes that China, Laos and Thailand are increasing their wage bill and expanding coverage of social services while China, the Philippines, Thailand and Vietnam are increasing minimum wages. 16 These countries are expanding social services on the assumption that it will increase domestic demand and raise living standards.

However, most research on the effects of social protection on demand, especially in the context of developing countries, is limited to its effect on local markets. Here we see that cash transfers in particular can stimulate local markets by increasing demand and thereby triggering local production. In remote areas of South Africa, for instance, cash transfers have stabilized the demand for food, reduced market risk for producers and traders, and supported local agricultural production. 17 Most social protection programmes are of a limited scale, with a low absolute value of transfers, and are usually implemented among the most economically marginalized populations. This limits the potential of the programmes to have a significant macroeconomic impact. 18

Ellen Lammers contributed to this article.