By their excessive use of debt, private equity companies in the US increase the risk of bankruptcy of real economy companies they acquire.

One of the lessons of the financial crisis of 2008 is that the excessive use of debt undermines the stability of the financial system and poses a threat to companies and their workers. In the US, banking regulators have taken steps to limit risky bank loans to companies. In March 2013 they issued guidelines that encourage banks to refuse to make loans that would raise the debt levels of a company beyond 6 times earnings (EBITDA). Nothing has been done, however, to directly limit the amount of debt private equity companies can put on the real economy companies they acquire. In fact, because interest payments on debt reduce corporate tax liabilities, tax policy actually encourages and rewards high debt levels.

The excessive use of debt magnifies private equity firms’ returns from successful investments, but it also means the real economy companies they acquire are much more likely to default or go bankrupt when the economy faces difficulties. A study of more than 2,000 highly leveraged companies found that roughly a quarter of them defaulted in the period from 2007 to the first quarter of 2010 during the recent economic crisis. Private equity funds are notorious for loading high levels of debt on the companies they buy. As the authors noted, the benefits of loading companies with debt when they are acquired have been widely noted. “Relatively less attention has been given to the potential downside of these transactions, namely that high leverage increases the risk that PE [private equity] portfolio firms become financially distressed.”

The run-up in the stock market means that companies that private equity acquires carry a high price tag. Low interest rates and easy access to credit mean that private equity firms can ‘afford’ these high prices because they can borrow huge amounts and load the debt on the companies they buy. As the figure below from PitchBook shows, the use of debt has gotten completely out of hand. 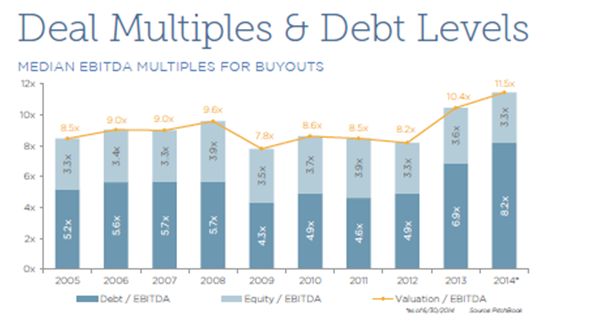 Cheap credit has increased the amount of debt private equity firms use in buyouts. At the median, deals today are financed with 71.6 percent debt. By comparison, median debt in 2007 buyouts was 62.9 percent. If the economy falters, companies, creditors, workers and communities will all pay the price for the reckless behaviour and speculative bets private equity is making. Private equity, meanwhile, has no obligation to repay the debts it places on the companies it acquires.

Companies that have been loaded with debt need to make payments to creditors in a timely manner or risk a default, bankruptcy or even liquidation. If they cannot make debt payments, they face consequences that would cost many or even all of the company’s employees their jobs. Cutting other costs in order to satisfy creditors and avoid a default is also costly to workers who are often forced to accept concessions on wages and benefits. Companies may also close some facilities and lay off the workers employed there to avoid defaulting on their loans. When debt burdened companies get in trouble, it is workers, their families and their communities who pay the price.

Policy makers in the US and elsewhere should take steps to discourage the risky use of debt. Here are three ideas:

2) Financial institutions could be required to limit loans so that a substantial part of the debt can be repaid over a five-year period.

3) The limited US regulatory oversight of private equity firms could be expanded along European lines so regulators can assess how risky the debt leveraged on companies is and impose limits if necessary. This last proposal is already implemented in the European Commission’s Alternative Investment Financial Managers Directive (AIFMD).

Policies that limit leverage to limit risk are long overdue.

COVID-19: towards a new economic order inspired by three visions of the Global South?