The race to the bottom explained

Author: Evert-jan Quak
Evert-jan Quak is now Research Officer for the K4D Programme at the Institute of Development Studies.

Given that a single monetary policy has been applied across the Eurozone, and given also the tough constraints on fiscal policy, labour market policy has been one of the few levers available to different countries to improve external competitiveness.

This is a background article for our longread Ideals versus reality – A false start for the Eurozone.

The debate about the ‘race to the bottom’ hypothesis focuses mainly on globalization and the entry of developing countries into the global market. The idea is that international trade and investment will turn to lower cost countries more easily when these countries become more integrated in the world economy. To attract investment, countries open their markets but due to international competition they are tempted to relax labour, environmental and tax regulations, at the detriment of social policies, and resulting in a race to the bottom.

The evidence on the existence of the race to the bottom is fiercely debated and varies depending on which countries are being compared. See, for example, Ronald Davies and Krishna Chaitanya Vadlamannati’s empirical investigation or William Olney’s search for evidence of the race to the bottom. To put it in perspective, for labour regulations and wages, mainstream economists in the 1980s and start of the 1990s did not believe that a race to the bottom would be initiated by international competition. First, because, in trade with low-wage countries, it was expected that manufacturing jobs would be replaced by high-end jobs in innovation and design and by a flourishing service sector. Second, competition with low-wage countries was comparatively unimportant at that time, because, most wealthy countries traded with other wealthy countries.

Since the 1990s, however, a rapidly rising share of wealthy countries’ trade is with low-wage countries, and there is increasing evidence that this type of trade is disruptive to Western labour markets. Now there is a shift in economists’ views, who are realizing that trade in goods with low-wage countries has contributed to the demise of manufacturing employment in the US (see, for example, the article by David Autor et al., ‘The China Syndrome: Local Labor Market Effects of Import Competition in the United States’, published in the American Economic Review in 2013) and European countries (see, for example, the working paper by Mariya Mileva et al., ‘The Effects of Globalization on Wage Inequality: New Insights from a Dynamic Trade Model with Heterogeneous Firms’, published in 2013) without sufficient upper-end jobs being created by way of compensation. The rapid economic growth of countries like India, Turkey, Brazil and China over the last 15 years has made many feel that globalization is having a more powerful effect on the structure of employment now than in the 1980s and start of the 1990s. Read more in: Marion Jansen et al. (2013) ‘Trade and Employment: From myths to facts’, ILO.

The general idea about the race to the bottom has always been that it is less destructive between countries with more comparable economies. But is this true? What is the evidence for a race to the bottom in the Eurozone? Given that a single monetary policy has been applied across the Eurozone, and given also the tough constraints on fiscal policy (through the Stability and Growth Pact), labour market policy has been one of the few levers available to different countries to improve external competitiveness. This can be explained because all members of the Eurozone have removed trade and capital barriers and adopted a common currency and, therefore, the aim of these countries to increase their trade surpluses and competitiveness can be achieved only by lowering costs and increasing labor productivity. Costs are cut by slashing wages and social benefit payments; productivity is increased by working employees harder (downsizing the labor force, longer hours, shorter vacations, and postponed retirement). Meanwhile, governments are cutting spending, which has an effect in those areas that could actually help increase productivity and enhance competitiveness in the long term, namely, public infrastructure investment and education. Read more in: Lapavitsas et al. (2010) Eurozone crisis: Beggara thyself and thy neighbour, RMF occasional report.

Although labour market policies are considered national initiatives, it was the Luxemburg European Council that launched the first European Employment Strategy in 1997, followed by the Lisbon Strategy in 2000, that pushed all EU countries in the same policy direction and in line with enhancing competitiveness. The Lisbon Strategy stated the need for more flexibility in labour markets. The apparent aims were to achieve full-employment, create a knowledge intensive labour market, and raise employment rates. During the 2000s, the Lisbon agenda was repeatedly reinforced, including by ‘Guidelines for Growth and Jobs’, ‘National Reform Programmes’ and ‘Recommendations’ from the European Council. Particularly after the Kok report (2004), policy toward labour markets has stressed the need for flexibility, contract standardization, the promotion of temporary and part-time work, and creation of (tax) incentives to encourage labour force participation.

Indeed there was also mention of improving the quality of employment in the Council meetings in Nice (2000) and Barcelona (2002), but the main pressure exerted by all the reform together has led to a ‘race to the bottom’ for workers in terms of pay and conditions.

“[M]any economists still propagate that ‘rigid’ labour markets in Continental Europe should be made more flexible. In fact, the call for more flexible labour relations is one for lower wages. It is interesting to confront such claims to evidence from micro-data. For example, firm-level estimates in the Netherlands indeed show that firms employing higher shares of flexible personnel pay lower wages. Estimates of sales equations, however, also show that firms with high shares of flexible labour (paying lower wages) do not conquer market shares from ‘rigid’ firms. The explanation is that firms with plenty of flexible labour realize lower productivity gains (Kleinknecht et al. 2006). Here again, we see that an orientation towards wage reduction is paying less than expected: lower wages are, to a significant degree, compensated by lower labour productivity growth.”

It was the Northern countries that were more adaptive to go further in deregulating their labour markets and de-standardizing labour contracts from the start of the euro because they faced initial high real wages and strong social policies, while other member states in the so called ‘peripheral countries’ typically had low real wages and weak welfare states. Political and trade union organization also differ substantially among Eurozone countries. Southern European countries have well-organized labour movements that confront policy-makers, while the trade unions in Northern European countries have a culture of compromise.

Although all Eurozone countries have joined the race to impose labour market flexibility and compress labour costs, there have been very different starting points between countries. Compared to each other, especially the Northern countries moderated and even lowered their wages and labour regulations between 1995 and 2008. On the other side, the Southern European countries saw some improvements in wages during the same period due to the artificial boom of the speculative real estate bubble, which increased demand and wages. But this came to an abrupt end with the global financial crisis and the austerity agenda for recovery. Countries like Greece, Spain, Portugal and Italy have been forced to lower labour costs and tax costs for corporations to increase competitiveness. For example Spain’s labour costs declined by 13% since 2010, compared with Germany’s labour costs.

Looking at the race to the bottom on taxation, it becomes clear that the marginal tax rate on corporate profits decreased in 23 OECD countries and tax rates on labour income went up on average, suggesting a possible burden shift from capital to labour. For all OECD countries, the average corporate income tax rate declined from 49% in 1982 to 38% in 1994 and 29% in 2007. The most likely explanation for this lower taxation is that labour is less mobile than capital. Capital owners exercise greater power over national governments to lower corporate taxes, because they can threaten to move to another country taking their capital with them. The consequence is that labour is more expensive; therefore, hampering the demand for labour results in less incentives to invest in labour. 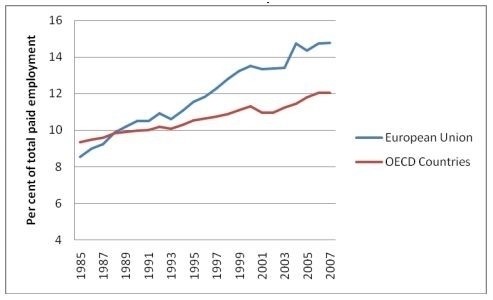 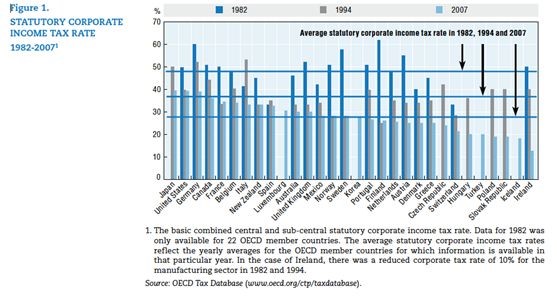 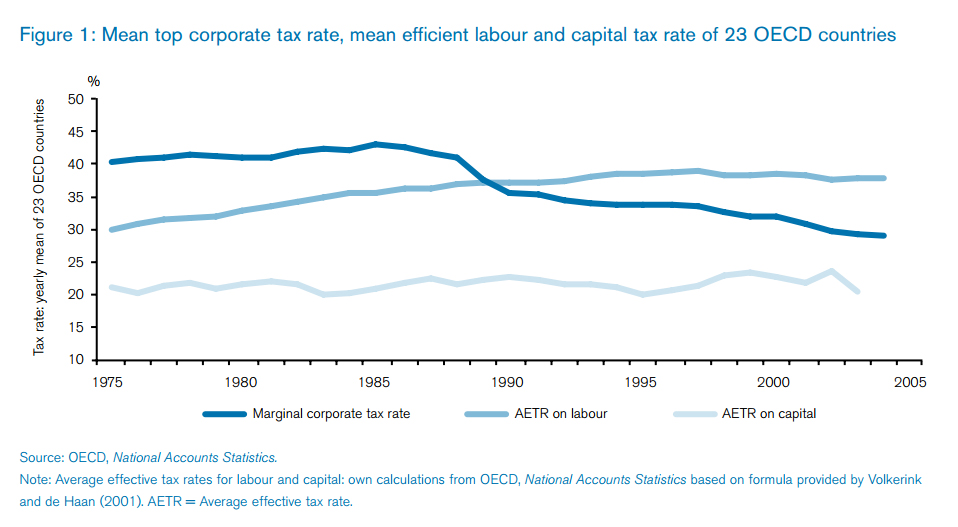