Young entrepreneurs in rural Africa as drivers for job creation

Africa is the world’s youngest continent, with two-thirds of its labour force working on farms and at least another 15% in small rural enterprises.Can Africa’s rural economy create enough jobs for predominantly young job-seekers? SMEs could be an entryway to engage Africa’s youth as entrepreneurs in the labour market. But farming might not be their best option.

Africa is a young, rural continent. Two-thirds of its labour force work on farms and at least another 15% in small rural enterprises. Urbanization is slowing down. Potts (2012) points out that the rate at which African countries are urbanizing has decreased or is even stagnating. Africa’s rural population is expected to continue growing until 2050 and, with the median age of its population amounting to only 18 years old, Africa is also the world’s “youngest” continent.

These facts pose a challenge. How can Africa’s rural economy create enough jobs for predominantly young job-seekers entering the labour market? Due to its youthful demographics, the continent’s labour supply is growing by an estimated 3% per year. Fox et al (2013) calculate that 170 million new job-seekers will need to find employment by 2020. The majority are young people living in rural areas. If sufficient jobs cannot be created for them, the consequences may include political instability, social unrest, crime and conflict.

It is unlikely that farming has the potential to absorb all or even most of these young job-seekers. Apart from the rising pressure for higher productivity in agriculture, for example through better mechanization and new technologies, farming is also becoming less popular as an occupation among young people.

Will young people find adequate livelihoods outside agriculture, for example through self-employment? Entrepreneurship is considered to have a high potential to accommodate young job-seekers, and Fox et al (2013) estimate that at least 65 million need to be absorbed by rural enterprises.

Whether this is a realistic expectation and whether Africa’s young population will find entrepreneurship worthwhile pursuing remains to be seen. Currently only a small number of young adults choose entrepreneurship as an occupation, despite many government and donor-funded support programs.

Why is entrepreneurship not more attractive for young adults in rural Africa?

In a recent IZA Discussion Paper we venture some answers to this question, based on an analysis that uses the World Bank’s recent Living Standards Measurement Study – Integrated Surveys of Agriculture (LSMS-ISA) data, covering six countries in Sub-Saharan Africa.

First, we confirm that only a few young adults own enterprises in rural areas. Non-farm entrepreneurship is more prevalent among middle-aged adults. For instance, in rural Tanzania and Nigeria less than 10% of all enterprise owners are younger than 25 and in rural Malawi, Niger and Uganda only around 12%.

Second, we find that young entrepreneurs operate enterprises that are less productive than middle-aged and older enterprise owners, even when controlling for individual, household and firm characteristics. The labour productivity differences range between 10 to 40% in Nigeria and between 30 to almost 70% in Uganda.

How can these findings be explained?

Possible answers include a lack of experience, as well as inequality of opportunities and aspirations. The former has recently been confirmed by Hessels et al (2014), who find evidence that entrepreneurs with more varied work experiences tend to be more successful in starting up new firms. However, young adults often lack the necessary skills to successfully start an enterprise. Inequality of opportunities can limit access of young adults to credit and other financial means to start a business. This may be due to a lack of wealth (being part of a poor rural household), collateral (few assets) and/or reputation in business (no opportunity to be entrepreneurial before). Hence, young adults in rural Africa may be restricted from entering the non-farm sector. Or, if they do start an enterprise, they may remain stuck in a low-productive, survivalist type of business activity instead of entering into the more lucrative and productive business segments.

To account for differences in labour productivity by type of business activity, we plot the estimated levels in eight different sectors, using data for rural Ethiopia. While acknowledging data limitations in measuring labour productivity, the graph suggests that some types of businesses (such as transport, restaurants and bars, and professional services) are more productive than businesses engaged in trade, agribusiness and the like. However, the more productive types of businesses also require more capital and more experience to operate, and hence exclude young adults from participating. 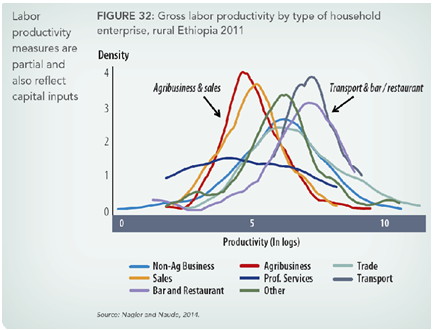 There might be an additional reason for limited enterprise operation among young people. In an earlier blog entry, we discussed the motivation of households to enter the non-farm sector. We explained that businesses often fulfill risk-management and risk-coping strategies in the context of agricultural risk, missing or imperfect insurance markets and a lack of social protection. Households with older heads may be more risk averse, perhaps due to larger families and other household-related responsibilities. They may also have more experience with agricultural risks, and therefore decide to allocate labour to various types of diversifying activities. Consequently these households are more likely to operate an enterprise as a form of self-insurance. In contrast younger household heads may not see the same necessity to do so.

First, smaller numbers of young entrepreneurs do not necessarily imply exclusion or discrimination, as many young adults are still in education or pursuing other kinds of opportunities. However, potential young entrepreneurs might still face obstacles to starting an enterprise, and our findings suggest that their lack of experience, training and reduced access to finance may limit them for choosing an appropriate occupation. Overcoming these entry barriers is currently at the core of many existing support programs for young entrepreneurs.

Second, once young entrepreneurs enter the non-farm sector, we suggest ensuring that their enterprises are productive and have the potential to grow, as more productive businesses are more likely to survive and to create jobs. This requires an environment where young entrepreneurs can build up assets and gain relevant experience and training. It also implies an environment where they are less exposed to incomplete markets and external shocks, for example through micro insurance schemes or the implementation of social safety nets.

Given the numbers of potential young entrepreneurs, the efficiency gains for dealing with incomplete or missing markets and limited social protection could be substantial. If more young adults enter the non-farm sector and start enterprises in pursuit of an opportunity, and if these enterprises grow and survive, they may contribute to the job creation urgently needed in Africa’s rural areas.

Paula Nagler is Assistant Professor in Social Protection and Entrepreneurship at the Maastricht School of Management.


Wim Naudé is Professor of Business and Entrepreneurship at Maastricht University.

COVID-19: towards a new economic order inspired by three visions of the Global South?